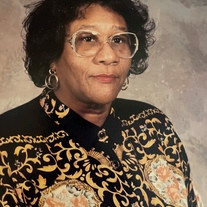 Arlinda Warren Leigh, 79, was born in Southampton County, Ivor, VA on January 24, 1942. She was next to the youngest of 13 children born to the late Samuel Stephen and Maggie Blow Warren. Arlinda slipped away peacefully in death at her home on October 10, 2021, with her family at her side. Her strong faith in the Bible sustained her and her family during this difficult time. After graduating from Hayden High School in 1961, she moved to New York where she worked as an administrative assistant, then she moved on to work with her brother as a machine operator, then to Aurora Plastics as an assembly line worker where she met her sister-in-law, a dietary aide at Northshore University Hospital, and then she moved back to Virginia. She later attended college in Chesapeake, VA. On September 17, 1966, she married her life partner Frank Leigh. they resided at 6225 Proctors Bridge Road, Ivor, VA where they raised two children who will miss her dearly. Arlinda continued to work when she returned to Virginia, where she held a number of jobs. She was employed as a dietary aide at Smithfield Skilled Nursing facility, Smithfield, VA, a postal custodian for U.S. Postal Service, Ivor, VA, a bookkeeper for her husband's trucking company, and her last position for 10 years as a bus driver for Southampton Academy, Courtland, VA. She studied the Bible and developed a strong love for Jehovah God. She was baptized in 1975 as one of Jehovah Witnesses. Engaging regularly in the field ministry is where she found the most fulfillment and contentment. She truly enjoyed sharing Bible teachings with everyone she met. Arlinda leaves to cherish her loving memories: her husband Frank; her children, Linda Leigh Lewis and Marcellina Leigh; one sister, Maggie Gannie Clary, Greensville, NC; two brothers, Samuel S. Warren (Georgia), Smithfield, VA, and Lewis Warren (Josephine), St. Albans, NY; two sisters-in-law, Ernestine Ridley, and Jean Ivey, Courtland, VA, and a host of nieces, nephews, cousins, extended spiritual family, and beloved friends. Eight sisters and two brothers preceded her in death. A Public Viewing will be held on Friday, October 22, 2021 from 2:00 PM to 7:00 PM at M.E. Fisher Funeral Home Chapel. A Graveside Service will be held on Saturday, October 23, 2021 at 1 PM at Pierce-Warren Cemetery, Roundhill Rd Route 710 Sedley, VA 27878.

Arlinda Warren Leigh, 79, was born in Southampton County, Ivor, VA on January 24, 1942. She was next to the youngest of 13 children born to the late Samuel Stephen and Maggie Blow Warren. Arlinda slipped away peacefully in death at her home... View Obituary & Service Information

The family of Mrs. Arlinda Warren Leigh created this Life Tributes page to make it easy to share your memories.

Send flowers to the Leigh family.