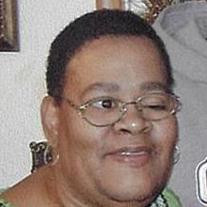 With sadness in our hearts, The Jones Family announces the passing of Barbara Ann Jones on December 15, 2020 after an ongoing battle with medical complications.  Barbara's life began on April 13, 1962 in Petersburg, Virginia, daughter of... View Obituary & Service Information

The family of Mrs. Barbara Ann Jones created this Life Tributes page to make it easy to share your memories.

With sadness in our hearts,&#160;The Jones Family announces the passing...

Send flowers to the Jones family.