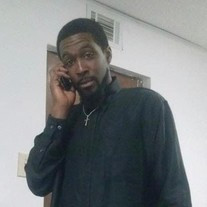 On August 20, 2020, Bobby L. Miller, 32, gained his wings. A resident of Hampton all of his life, Bobby was born to Gay ReVonda Miller and Bobby Lynn Davis. Bobby attended Hampton City Schools. At the young age of just 13, Bobby, affectionately known as "Chunky", acquired his first paying job and worked from then on out. He was a very hard working man, a jack of all trades. Bobby was a loving, kind-hearted, giving, and very funny guy! He could make even the darkest days bright with his genuine personality and notorious wit. When Bobby wasn't working or spending time with his family, you could find him shooting pool with the league or just hanging and spreading light with his extended families-because there were many. He was very loved and in a short 32 years, he managed to make those who needed to, feel just as loved. He is preceded in death by his mother, Gay R. Miller; grandmother, Annie Mae Brown; uncle, James N. Brown, Jr.; and his aunt, Brenda Y. Brown. Bobby leaves to cherish his memories his daughters, Bobbi and Baleigh Miller; his aunts, Helen and Ruth Brown; his sisters and brothers LaToya, Greg, and Brenda Miller, Kenia Scott, Brennan Davis, and Janae Mason; his father, Bobby L. Davis; and a host of cousins, nieces, nephews, friends, and acquaintances.

The family of Mr. Bobby Lynn Miller, Jr. created this Life Tributes page to make it easy to share your memories.

Send flowers to the Miller family.