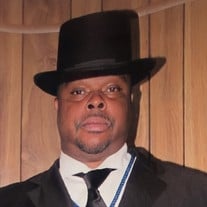 On Wednesday, August 4, 2021, our hearts were saddened by the transitioning of our beloved Mr. Cecil Clayton Henderson, Sr., who passed away peacefully at his home. He was born December 31, 1965 to the late Marjorie D. and James Henderson in... View Obituary & Service Information

The family of Mr. Cecil Clayton Henderson created this Life Tributes page to make it easy to share your memories.

Send flowers to the Henderson family.