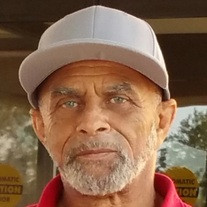 On Tuesday, December 14, 2021, our hearts were saddened by the passing of our loved one as he entered into eternal rest at his residence in Disputanta, Virginia.   Cecil Byron "Pop" Morgan was born on January 26, 1952 in Wakefield, Virginia... View Obituary & Service Information

The family of Mr. Cecil Byron Morgan created this Life Tributes page to make it easy to share your memories.

Send flowers to the Morgan family.