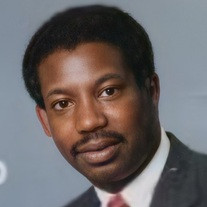 "I Shall Wear A Crown... When it's all over, I'm Going to Put on My Robe and Tell the Story How I Made It Over Soon As I Get Home… I Shall See HIS Face" On Monday, October 18, 2021, on his grandson Jamon's 19th birthday, God in His Infinite Wisdom called home to Glory, Mr. Chauncey Dexter Rayfield, 67, at the Battlefield Park Health Care Center from labor to reward after a brief illness. Chauncey now has his Crown, well done thy good and faithful servant. Chauncey was born April 6, 1954 to the late Charles Rayfield and Sadie Washington Harrison Rayfield. He was a great Joy to his parents and enjoyed spending quality time and helping them from the love of his heart. Chauncey in his early years grew up in "The Delectable Heights" on Harding Street in Petersburg, Virginia. With his infectious personality, Chauncey made lifelong friendships with many he encountered. He was always inquisitive learning about new ideas in electronics, technology and engineering. Chauncey was a proud graduate of The Petersburg High School Class of 1972 located on Washington Street now the Appomattox Regional Governor's School. While being in high school, Chauncey was involved in various school activities, including the Industrial Arts Club and Distributive Education Clubs of America (DECA). Chauncey later matriculated to Virginia State College (now University) and earned a Bachelor of Arts degree in Industrial Arts. He was very studious and later completed several courses in the graduate program at Virginia State College (now University). He loved his alma mater with all his heart. Hail State! After completing college, Chauncey taught briefly at Hopewell High School as an Industrial Arts teacher. He later landed a rewarding career at IBM as a Customer Engineer. Chauncey serviced many commercial accounts in Chicago, Virginia, North Carolina and Atlanta. He was one that went above and beyond the call of duty. He was skilled in servicing mainframe computer systems, computer coding and computer networking. Chauncey was baptized and a member of The First Baptist Church, Harrison Street, Petersburg, Virginia for over 60 years, one of the first African-American Baptist congregations in the United States, and one of the oldest black churches in the nation. Being a faithful Servant of the Lord, he sang in the choir and assisted with electrical and technical issues in the church. Chauncey had an entrepreneurial spirit that he established and became founder of his company, Crime Watch Systems in the early 80's. He installed alarm systems and security cameras throughout the Tri-City, Richmond and Northern Virginia areas. Chauncey developed a large cliental for residential and commercial based over the years and was considered the "Computer Guru". Many people would call Chauncey for electrical, technical and computer related tasks. Chauncey was an expert electrician and could fix almost anything. Without any hesitation, Chauncey was dedicated to all of his customers until his declining health. In his past time, Chauncey enjoyed spending time with his loving daughter, Cymondria and grandson Jamon, which he often referred to as "The Jay Man". Chauncey loved listening to music, among his favorites: The Isley Brothers, Donnie McClurkin and Old School Music. In the summer, Chauncey took pride and joy in the up keep of his lawn. Many will see him cutting his grass at home and would acknowledge him with a toot and smile. Chauncey loved drinking diet cokes and eating good food. Chauncey and his daughter would talk on the phone at least 10 times a day. He would choose a "Song of the Day" and he and Cymondria would have fun singing and laughing. Chauncey is predeceased by his parents, Charles and Sadie Rayfield; siblings, Charles Jr., Calvin, and Paulette Rayfield. Chauncey will be greatly missed by his family, customers and those in the community that knew him. To cherish his legacy, love and memories, a devoted and loving daughter, Cymondria Zemoria Smith of Petersburg, a loving granddaughter, Ciyani Monet Smith of Petersburg; a grandson that he adored, Jamon Lemeuel Smith of Petersburg; sister, Gussie Rayfield of Ocean City, Maryland; devoted and caring cousins, Robert "Bobby" and Bernice Harrison of Charlotte, North Caroline; cousins, Valerie Harrison Long and Gregory Harrison of Petersburg; and a host of numerous cousins and relatives. Devoted and awesome extended family, Bernard Lundy, Jr. and Pamela Lundy. Special Friends for over 40 plus years, Donald Mitchell, Jerome Bassfield, Ralph Bolling, Walt Parham, Charles Lewis, David Morgan, Jimmy L. West, Jr., Tina Urqhart, Shirley Critton and Ernest Barnes. Loving Neighbors of South West Street, Janelle Giles, Don Rose, James Louis and Chris Parham. A very special thank you to Southside Virginia Emergency Crew, Officer Ellie Powers of Petersburg Bureau of Police, Saint Mary's Hospital, Richmond, and Battlefield Park Healthcare Center for the care extended during Chauncey's illness. We will forever cherish the wonderful memories of Chauncey. May you rest peacefully in Heaven, this is not a forever good-bye. We will see you later. A Celebration of Life will be held at 11:00 A.M. on Saturday, October 30, 2021 at Tucker & Fisher Celebration of Life Chapel, 415 Halifax St., Petersburg, VA with Rev. Dennis L. Smith, officiating and Rev. Derek D. Lewis, eulogizing. Interment will follow at Blandford Cemetery, 319 South Crater Rd., Petersburg, VA. The service will be live streamed. Public viewing will Friday, October 29, 2021 from 10:00 A.M. - 8:00 P.M. at the funeral home. A repast will follow service and interment at The Twelfth Masonic Temple, 1004 Halifax Street, Petersburg, Virginia. Final Care and Compassionate Services are being provided to the family by the professional staff of Tucker & Fisher Funeral Home and Cremation Services, 415 Halifax St., Petersburg, VA.

"I Shall Wear A Crown... When it's all over, I'm Going... View Obituary & Service Information

The family of Mr. Chauncey D. Rayfield created this Life Tributes page to make it easy to share your memories.

Send flowers to the Rayfield family.