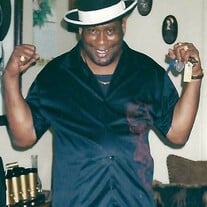 Clarence Leroy Acker Jr., affectionately known as "Leroy" of Newport News, VA. died Saturday, October 16, 2021. Leroy was born to the late Clarence L. Acker Sr. & Eula M. Acker on September 10, 1944. He was one that loves to joke and keep you laughing. He was very creative with his drawings and his styles of dress wear. He was one that was very particular about his cars and anything else that he owned. He loved his wrestling and football games. He attended Carver High School. He retired from Lowes as a Custodian. Leroy was a fun person to be around once you got acquainted with him. He was preceded in death by his sister, Dorothy Robinson, Brother, Thomas Acker, two nephews Anthony Robinson, Thomas Acker jr. One niece Shonda Acker. He was devoted to his fiancée Jean for 27 years, so many precious memories remain in her heart. He leaves to cherish his memories, His fiancee Jean Washington; four children, Jacqueline( Walter) Greene, Clarence Acker III, Darlene Ack Holloway, Sean Acker, Children in love Sharon Washington, Thomas Washington, Mother in Love Carolyn Ashlock, 5 sisters in love . He had 11 grandchildren, DeAndre' Greene(Sherita), Walter Greene III, Jasmine(Derek)Mitchener Jalisha( Keith Sample, Paige Acker, Tyger Acker, Indigo Acker, Judah Acker, Sydney Acker, and Sean Acker, Janiyah Holloway 22 great-grandchildren, 2 nephews, James Robinson,(Dakota) Econto Robinson( Lorraine) one Niece Malinda Robinson(Kenneth Sr.) Grandchildren in love Michael Washington, Chene Beldo'bey(Joseph) Armani Washington. 6 Great-grandchildren in love, and many hosts of other relatives and friends.

The family of Mr. Clarence Leroy Acker, Jr. created this Life Tributes page to make it easy to share your memories.

Send flowers to the Acker family.