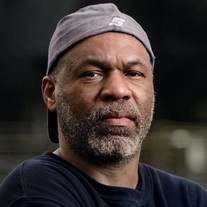 Mr. Clarence Renard Hannon, affectionately known as Noddie, of Petersburg, Virginia, peacefully gained his wings on December 5, 2021 at VCU Medical Center in Richmond, VA. Clarence whispered to his devoted big sister, Sharon that he wanted to be free of pain. Just days after devoting his life to Christ, his wish was granted. Clarence Hannon was born on April 14, 1961 in Augusta, GA to Mary L. Hannon and the stepson to the late Herman W. Hannon, Sr. In Augusta, Georgia during his adolescence, Clarence was known as the "Honey Bun Man". As a child, Clarence walked daily with his cousin Katrina to get a Honey Bun at the local bakery. Soon after, neighbors and many others fully started to see his quiet and calm nature. Clarence graduated in 1980 from Prince George High School in Prince George, VA. Shortly after, he became employed by Winn Dixie, Hopewell, VA where he remained an employee for twenty-five years. Clarence was adored by many patrons and managers alike and known for his work ethic. Clarence was employed at Auto Works in Colonial Heights, VA where he remained a loyal employee until his untimely passing. Clarence found his incomparable niche by showcasing his talent on the grounds of Virginia Motorsports Park in Dinwiddie, VA. There he established several endearing and long-term relationships, many of which he considered as family and also shared his passion and love for photography and all cars. Clarence was known to be knowledgeable, an enthusiastic teacher and a mentor to many who sought his expertise. He was a very gifted & talented photographer and artist who aspired to open his own studio. Widely characterized as a man of few words, Clarence's calm demeanor was one of listening, observing, and respectfully allowing others to shine. Clarence was a man of peace and love. His placidity to others captured the essence of his life. His peaceful and earthly presence will be missed by all, yet his legacy for capturing life's essence will astonish us forever. He leaves to cherish his memory: his beloved mother, Mary Hannon of Petersburg, VA; five siblings, Sharon Rivera Sanchez (Tito) of Richmond, VA, Pamela Perry (Rick) of Augusta, GA, Wanda Hannon of Petersburg, VA and Diann Ames Hannon (Arron ) of Jacksonville, FL and Herman Hannon, Jr. (Dawn) of Chester, VA; aunts, Sarah Jones, Frankie Dean and Pat Jones of Augusta GA and Honey Buns; cousin, Katherine Frails; along with a host of uncles, nephews, nieces, great nephews and great nieces, cousins and special friends devoted to Clarence during his life and committed to carrying on his legacy, Mike Goode, Scott Soucy, Tracy Portz and son Mase, Kyle, Mark and Katherine Henry, Tyler, Judy Franklin as well as the VMP and PDRA Racing Family. A Celebration of Life will be held 1:00 P.M., Saturday, December 18, 2021 at Tucker & Fisher Celebration of Life Chapel, 415 Halifax St., Petersburg, VA with Pastor Belinda Baugh, Pastor of New Divine Worship Center, Petersburg, VA officiating. Interment will follow at Southlawn Memorial Park, 1911 Birdsong Rd., South Prince George, VA. The service will be live streamed. Public viewing will be Friday, December 17, 2021 from 12:00 P.M. - 8:00 P.M. Final Care and Compassionate Services are being provided to the family by the professional staff of Tucker & Fisher Funeral Home and Cremation Services, 415 Halifax St., Petersburg, VA (804)-324-5529.

The family of Mr. Clarence Renard Hannon created this Life Tributes page to make it easy to share your memories.

Send flowers to the Hannon family.