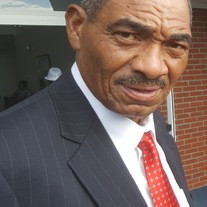 On October 15th, the world lost one of its best fishermen. Claude Smith (Teddy) born August 27th, 1951 entered into eternal rest on Thursday, October 15th, at Viadant Medical Center Greenville, NC. Claude was a humble, joyful, stern, funny, and loving man who loved to fish and bring joy and delight to everyone he encountered; whether through conversation or sitting at his kitchen table eating one of his delicious meals. He was known for his big breakfasts and his Pineapple Cake he learned how to make from his mother, Martha. Claude was a Jack of all trades; from construction, plumbing, painting, and carpentry, to changing oil and tires at Cherry Tire Shop. Claude worked for Dodson Pest Control, West End Territory Maintenance Department, New Community Corporation. Claude was born the son of late Hosie Smith and Martha Lee Smith of Rocky Mount. Claude was married to the Late Joanne Jones Smith. Claude has three sons Reginald L. Smith, NJ, Antonio L. Smith, VA; and the Late Claude Smith Jr. Claude's siblings are Ethel Bryant of Rocky Mount. The late Theodore Smith, James Thomas Smith of Rocky Mount, Wilbert Smith and Hattie Smith of Rocky Mount, Hosie Smith Jr. of Rocky Mount; Leon Smith and Bernadette Smith of High Point, Genal Smith of NY, Donald Smith and Luretta of Texas; Michael Smith of Rocky Mount, Larry Smith of Raleigh. Brother-in-law Late Henry Lyons Sr., Late James Bryant. Claude has eight grandchildren. Claude also has several nieces and nephews. Henry Lyons Jr. was his uncle's road dog. Claude had many cousins and close family friends. Lancaster Harris was a close cousin; along with Jolee Cherry, a close family friend. To know Claude was to know a friend. His magnetic personality made many friendships over the years. His humor and cooking kept them there. His love of fishing whether it be on the pier at the ocean or traveling through the woods to just that right spot on the Tar River. Teddy was going to catch some catfish. Fishing for Teddy was peaceful and tranquil it gave way for family and friends to come together talk trash, catch fish, and go home and eat, drink and be full. Claude's declining health was a reality many never know because of the way he carried himself. A proud man, not letting anyone feel sorry for him; not showing all his pain, and encouraging others while he was going through his own ordeal.

The family of Mr. Claude Teddy Smith created this Life Tributes page to make it easy to share your memories.

On October 15th, the world lost one of its best fishermen. Claude...

Send flowers to the Smith family.