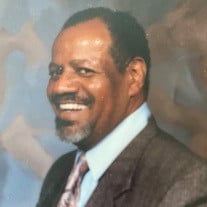 David Thornton, 78, went home to be with the Lord and join his wife Patricia, on Thursday, August 20, 2020 at St. Mary's Hospital, Richmond, VA. He was born September 25, 1941 to the late Burley Thornton and Emily Marie Thornton. David attended the Chester County Public School System and graduated from Conestoga High School, Chester County, Pennsylvania, where he held an All-State Championship in football as a Running Half-Back. At an early age, David joined New Hope Baptist Church, Paoli, Pennsylvania. David was a member of the Masonic Lodge 23 of Westchester, Pennsylvania. He also served as Little League Coach of the LAFA Team while in Pennsylvania. In 2001, David met the love of his life, Patricia and relocated to Virginia where he joined Third Baptist Church, Petersburg, Virgina. David, known to his family as Dave, was a family oriented man. He was very distinguished and often teased for his proper swagger. He loved reading books and smoking cigars. He also loved singing in his church choir where he was an active member until his wife, Patricia's health began to decline. Dave was an avid Philadelphia Eagles Fan. He kept season passes to all of their home games and loved to tailgate with his sons. David wore Eagles gear every day and could often be spotted in that green gear. David and Patricia were known to others for their lavish holiday parties, cookouts and big Christmas celebrations. They loved to give and to see others blessed. They loved their grandchildren and Dave took great pride in stepping in to raise his grandson London to be a mighty man of God. He would always say that as a Mason, it came natural for him to step in and help women and children. Dave loved to eat cherry pies while singing and listening to the song, "Cooling Water." Dave found great comfort in his last days living with his daughter, Tosheika and helping her to run her Real Estate Company. He often would tell her that he was so proud of her and always told her that she was destined to be a millionaire in the real estate business. Every day that she went to work, he couldn't wait to ask her, "Did you make the sale?" Travis and Latarsha Woods would often call to pray and sing for him and would tell them, "Don't pray for me, pray for Sheika. I'm going to be with the Lord and my wife!" David courageously fought cancer and was not afraid to go. In his own words, the last thing he said was, "Forever is too long to wait to see my wife." His struggle ended down here with his best friend Julio and his wife by his side as the angels took him to his new home for his eternal rest. Along with his parents and his wife, Patricia Goode-Thornton, David was preceded in death by three brothers, Edward Thornton, John Thornton and Henry Thornton and two sisters, Theresa Thornton Ruffin and Emily Thornton Lucas. David leaves to cherish his memories three sons, David Thornton (Hazel), Michael Thornton, and Ronald Thornton (Ruth) all off PA; a devoted stepdaughter and caregiver, Tosheika Goode of Chesterfield, VA; his grandchildren, Kelis Goode, London Goode and Milan Goode all of VA, David Thornton, Christopher Thornton, Annalise Thornton, Mia Thornton, Kierra Hammock, Chanel Hammock, Courtney Thornton and Latandra Bizkson-Finklon all of PA; one sister, Marian Henry of PA; goddaughters, Sade Raines and Angela Mosby Swiney; a devoted sister-in-law, Joyce Goode, Sheila Goode, Carolyn Goode, Diane Goode; brother-in-law, Bennie Goode (Wilnet) all of VA; devoted niece, Lashawn Mills; two devoted great nieces, Ashleigh and Aaliyah Coley along with his lifelong friends, Julio Perez and Paula Perez, Donald Miller, Daniel Cogan all of PA, Thomas and Dorrine Spencer and Katrina Batts all of VA; and a host of other relatives and friends. A Celebration of Life will be held 12 Noon, Saturday, August 29, 2020 at Tucker & Fisher Funeral Home and Cremation Services, 415 Halifax St., Petersburg, VA with Rev. Brenda Cherry officiating. Interment will follow at Wilkerson Memorial Cemetery, Petersburg, VA. The service will be live streamed. Public viewing will be Friday, August 28, 2020 from 10:00 A.M. - 8:00 P.M. A face mask/covering will be required while attending all services and viewings.

David Thornton, 78, went home to be with the Lord and join his wife Patricia, on Thursday, August 20, 2020 at St. Mary's Hospital, Richmond, VA. He was born September 25, 1941 to the late Burley Thornton and Emily Marie Thornton. David attended... View Obituary & Service Information

The family of Mr. David Thornton created this Life Tributes page to make it easy to share your memories.

David Thornton, 78, went home to be with the Lord and join his...

Send flowers to the Thornton family.