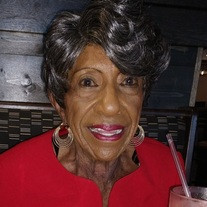 ELEANOR LOUISE SCOTT ALTMAN September 23, 1930 - July 25, 2021 Eleanor Louise Scott Altman, age 90, passed away Sunday, July 25, 2021 in Petersburg, Virginia. Born September 23, 1930 in Charleston, West Virginia, she was the daughter of the late William Edward and Marie (Kessler) Scott. At age 12, she joined and was baptized at Ebeneezer Baptist Church in Charleston, West Virginia and was a life long devout Christian. Eleanor was loved by many and was always happy to help anyone in need. After graduating from West Virginia State in Institute, West Virginia and receiving her Bachelor of Science in Biology, she went on to teach Microbiology at Ohio State University. Eleanor went on to work in Microbiology at various hospitals in Columbus and Cleveland, Ohio areas, working up to the position of supervisor for Hillcrest Hospital for 13 years before switching careers and working for Cuyahoga County in Accounting. She later went on to become a successful sole proprietor of 3 different businesses before retiring for good in 2011. Eleanor won "First Class Citizen Award" from the City of Cleveland in 1994 and 2001. She belonged to the American Society of Microbiology, International Society of Clinical Laboratory Technologists, the National Certification Agency for Medical Laboratory Personnel and was a Sister of the Eastern Star. Eleanor was preceded in death by her husband, Roosevelt Altman; brothers, Willard, Leonard Joe, Anthony, Randolph and Wayne Scott; and a sister, Carol Ann Jones. Those left to cherish her memory: are three sisters, Barbara Pierson (Dennis), Michelle Grady (Sharrow) and Karen Royster (Rufus); four brothers, Jared, Earl (Gwendolyn), Michael (Linda) and Kevin (Deborah) Scott; devoted nephew, Frank P. Scott and a host of other nieces, nephews and friends. Services of Celebration and Remembrance will be on Saturday, September 25, 2021 with time and place to be annouced later.

The family of Mrs. Eleanor Louise Altman created this Life Tributes page to make it easy to share your memories.

Send flowers to the Altman family.