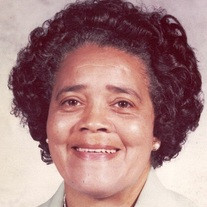 Truly my soul waiteth upon God: from Him cometh my Salvation.…………Psalm 61:1 On Monday, January 25, 2021, Esther Scott Lindsey-Lee went home to be with the Lord. She was the youngest daughter born to the late Deacon William H. and Ethel G. Scott. Esther was born May 1, 1929 in Petersburg, Virginia. Esther was educated in Petersburg Public Schools, Petersburg, VA, graduating in 1945 from Peabody High School. She then attended Virginia State College for two years which perpetuated her love and dedication in education. She provided twenty-one years of service as a Paraprofessional in the academic area of Developmental Reading to children in the Petersburg Public School System. She retired in 1989. Esther began her Christian journey as a toddler at Zion Baptist Church and was baptized in 1939. For a brief time, she worshipped at the Church of Christ with her husband, John J. Lindsey, but later returned to Zion Baptist Church. She was an active and faithful member of the Ladies Bible Class, Bible School, the Fellowshippers (Choir), Wellness Ministry, Nursing Home Ministry, and the Missionary Association. She credited her passion for the Missionary Ministry to her delegate opportunities at Carey Convention as a teenager and to her love for the dedication and hard work of the founding Matriarchs of Zion"s Missionary Programs. Never one to seek attention to herself, Esther was recognized and respected for her zeal and integrity in attaining Zion's mission goals. It was her joy to participate, learn and grow on the local and state levels in the Women's Division of the Baptist General Association. Esther was married to the late George L. Lee on December 6, 1993. Fondly regarding each other with loving admiration and dedication, their love for music was reflected in their Christian walk. Esther loved to read and sing. She especially enjoyed reciting poetry. She was very creative and enjoyed making crafts, sewing and working puzzles. Her sweet disposition and willingness to help others revealed her gentle nature and concern for others. Whether in the classroom, home, church or community, her desire to be genuinely kind to others was always of greatest importance. Along with her parents, Esther was preceded in death by her brother, William H. Scott, Jr. and her brother-in-law, Burton Hayes, Jr. Left to cherish her memory and celebrate her life are three sons, William Gresham of Norristown, PA, Reginald Lindsey of Bronx, NY and Phillip Lindsey of Petersburg, VA; four daughters, Johnnye Evans (Fred, Sr.) of Fort Washington, MD, Gwendolyn Parrish of Chesterfield, VA, Gayle Hill of Chester, VA and Debra Roache' (Calvin) of Petersburg, VA; a sister, Mildred S. Hayes of Ettrick, VA; four step-children; two sisters-in-law; twelve grandchildren, twenty great-grandchildren; two nephews, five great-nephews and two great-nieces; a host of cousins, other relatives and devoted friends. A private interment will be held at Wilkerson Memorial Cemetery, Petersburg, VA.

The family of Mrs. Esther S. Lindsey-Lee created this Life Tributes page to make it easy to share your memories.

Truly my soul waiteth upon God: from Him cometh my Salvation.…………Psalm...

Send flowers to the Lindsey-Lee family.