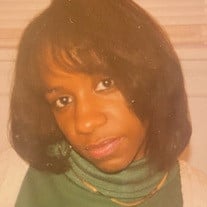 On Friday, January 22, 2021, God in His infinite wisdom saw fit to call his precious daughter, Ms. Fonda Paige Sanders from labor to reward. Fonda, 54, of Hopewell, VA, entered eternal rest at Chesapeake Regional Medical Center, Chesapeake, VA. She was preceded in death by her mother and father, Mother Elnora and Deacon John Sanders, Sr.; sisters, Maryam Rashed, Rayya O'Neal, Eva Bright and Rebecca Sanders and aunt, Alberta Bruce. Fonda was born on September 26, 1966 in Hopewell, VA. She was the youngest of nine children. She graduated from Hopewell High School in 1985. She later went on to attend college. After getting her degree, she went to work at Empire Beef for several years and later went on to start her own Home Daycare business. Fonda had a love for children which lead her to adopt and take care of foster children throughout the years. Fonda loved her family, especially her children. She was full of fun and laughter and was always very pleasant. Fonda was known for being very outspoken. She had no issues speaking her mind or voicing her opinion no matter the time or place. She leaves to cherish her memory three loving and devoted children, Timothy G. Sanders, Jade Fonda Sanders and Jamar M. Sanders; four grandchildren, Elijah Sanders, Arianna Sanders, Aulani Brown and Aubrey Brown; one sister, Roberta Mason, four brothers, YahYah Waheed (Jackie), Raymond Sanders, James Sanders (Nefertari) and Joel Sanders (Monann); a host of nieces and nephews, cousins, other relatives and friends. A Celebration of Life will be held 1:00 P.M., Saturday, January 30, 2021 at Tucker & Fisher Celebration of Life Chapel, 415 Halifax St., Petersburg, VA. Fonda will be laid to rest at Blandford Cemetery, 319 S. Crater Rd., Petersburg, VA. The service will be live streamed. Due to CDA restrictions there will be limited seating. A facial covering along with social distancing will be observed.

The family of Ms. Fonda P. Sanders created this Life Tributes page to make it easy to share your memories.

Send flowers to the Sanders family.