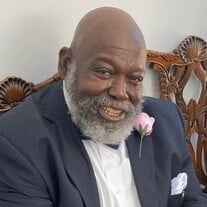 Frank Addrell Nelson, loving father, grandfather, uncle, nephew, cousin, and cherished brother entered his rest on January 28, 2022, after a brief illness. He was born July 13, 1949, in Newport News, VA. He was preceded in death by his parents, Sallie and William A. Nelson, Sr., and a precious grandson, Jordan Nelson at age 3. Affectionately known as "Frankie" to many, he accepted Christ as his Lord and Savior at an early age. He grew up in St. Timothy Church of Christ (Holiness) USA, attending services and Holiness Young People's Union. After completing piano lessons under the tutelage of Elizabeth Brunson, Frankie played piano at an early age for St. Timothy, later offering his gifts and talents as Minister of Music to Ivy Baptist Church, under the pastorate of the late Dr. Henry Maxwell, Sr., First Baptist Church East End, under the pastorates of the late Drs. Woodrow Brown, Sr., and Woodrow Brown, Jr. and later to New Mount Olive Baptist Church for more than 37 years, under the pastorate and spiritual leadership of Dr. W. Randolph Rylander. Frank attended Dunbar Elementary School, where he played "B" flat clarinet in the band with the late John W. Stewart. In 1962, when Frank was in the 7th grade, he played the leading role as Captain Georg von Trapp in "The Sound of Music" musical. He attended Huntington High School and was the woodwind section leader for the Huntington High School Marching Sound of 100, under the leadership and music mentorship of the late Wray R. Herring, Sr. He graduated from Huntington High School in 1967. Following high school, he attended two years at Virginia Union University in Richmond, VA with a major in music performance. Frank had a passion for music and loved the hymns of the church. He gave his life to teaching choirs the importance of worship and entering into and experiencing the presence of God through worship. He adopted the name Maestro FAN and played masterfully and melodically whenever given the opportunity. Frank produced "The Frank Nelson Project" in 2009. He was thankful to God for blessing him with the gift and vision to produce the CD Project. He was appreciative to the vocalists, who with their dedication to the Project made it successful. Frank also enjoyed teaching piano and taught many students over his lifetime. He knew every song in John Thompson's Modern Course for the Piano Book and how they were supposed to sound and knew if the song and notes were being played correctly. His most challenging students were his family members. Frank was a dedicated member of the Hampton University Ministers' Conference serving in the HU Choir Directors' & Organists' Guild for more than 40 years. He was faithful and was the current President of the HU Choir Directors' & Organists' Guild until his passing. He also was a member of Phi Beta Sigma Fraternity, Inc. Frank was formerly married to Vera Simmons. During this marriage, they raised two daughters, Traci and Alana. In 1992, Frank married, VeElla "Candi" Hicks. Frank and VeElla worked to blend their families with his two daughters and VeElla's two sons, Samual and Nicholas. He leaves to cherish his memories, his devoted wife of 29 years, VeElla Nelson of Newport News; two brothers, Dr. William A. Nelson, Jr. (Glen Allen, VA) and Dr. Jeffrey K. Nelson, Sr. (Tisha) of Hampton; two sisters, Janet B. Harrison (William) and Dr. Saundra N. Cherry of Newport News; two daughters, Traci Coleman (Travis) of Sandston, VA and Alana Nelson of Newport News; two sons, Nicholas and Samual Hicks; six grandsons, Joshua, Jeremiah, Jaquan (Nelson); Dwight Hawkins, Jr., and Cincere Hicks; six granddaughters, Jada, Jessica, Tianna (Nelson); D'Laysiah Hawkins; Nia (Nelson), Mi'Angel Hicks; one great-grandson, Kayson (Nelson); his "favorite aunt," Addie Threatt, three sisters-in-law, Samantha Johnson (Vernon), Vonda Carter-Wilkins, and Wanda Wills, a "family strong of cousins, nieces, nephews," a host of loved ones and friends, and his New Mount Olive Baptist Church family.

Frank Addrell Nelson, loving father, grandfather, uncle, nephew, cousin, and cherished brother entered his rest on January 28, 2022, after a brief illness. He was born July 13, 1949, in Newport News, VA. He was preceded in death by his parents,... View Obituary & Service Information

The family of Mr. Frank Addrell Nelson created this Life Tributes page to make it easy to share your memories.

Send flowers to the Nelson family.