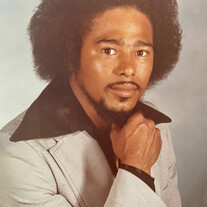 Frederick Nathan Guild Sr., transitioned into eternal peace at the age of 65 unexpectedly on May 12, 2021, at Mary Immaculate Hospital. He was born October 18, 1955, in New Orleans, LA to the union of Raymond W. Guild Sr. and Josephine Penns Guild. Frederick graduated from L.B. Landry Sr. High School in 1974. Following graduation, he served with the Navy for over 10 years. While serving in the Navy Frederick's first marriage was to Ms. Georgia M. Guild. Then began working in Newport News Public Water Works before becoming a welder at the Huntington Ingalls Shipyard where he worked for over 40 years. Frederick then met his lifelong companion and devoted friend Ms. Janette Brown, who was devoted to him for over 20 years. After years of educating himself and doing his research on Moor Americans, he decided on May 27, 2017, to reclaim his nationality and became a ' Moor American. He then took on the name Frederick N. Guild Bey. Frederick Guild was a devoted father and very family-oriented. He was well respected within his family and very well known in his community as "Mr. Freddie" or "Freddie G". He was very well educated and had a strong spirit. His presence left an impact on many lives and his legacy will live on forever. He was proceeded in death by his father Raymond W. Guild Sr., mother Josephine Penns Bingham.; two brothers Raymond W. Guild Jr., and J.D. Guild; Five Aunts and Two Uncles. He leaves to cherish his love companion Janette Brown (Jermain Minnigan , Sabrina)Son and niece of devoted friend of Newport News, VA; his three children Frederick Benn (Demetres) of New Orleans, LA, Tameka Guild (Tavius) Hampton, VA, Fredrick N. Guild Jr. of Hampton, VA, One stepson Lester Garrett (Monique) of St. Mary, GA. He leaves one brother Timothy Guild (Kim) of Colorado Springs, CO; two sisters Ceola Zanders (Curtis) of Newport News, VA and Janice King (Rodney) of Georgia. Eight grandchildren, eight great-grandchildren. He was also survived by a Special Friend Ron "RP" by a host of Aunts, Uncles, Nieces, Nephews, Family and Friends.

Frederick Nathan Guild Sr., transitioned into eternal peace at the age of 65 unexpectedly on May 12, 2021, at Mary Immaculate Hospital. He was born October 18, 1955, in New Orleans, LA to the union of Raymond W. Guild Sr. and Josephine Penns... View Obituary & Service Information

The family of Mr. Fredrick Nathan Guild, Sr. created this Life Tributes page to make it easy to share your memories.

Send flowers to the Guild family.