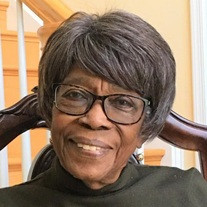 Fredericka Palmer Diah, aka Aunt Fred, age 88, was a resident of Chester, VA.  She passed away on December 24, 2020 surrounded by her family.   Fredericka Palmer Diah was born September 26, 1932 in Muir House, St. Ann, Jamaica to Hylton and Martina Palmer. She was the fifth of nine children that included siblings: Euva, Rupert, Ruth, Mannaseh, Henry, Winnifred, Cislyn and Raphael. Aunt Fred immigrated to the United States in 1968 and shortly was able to bring her four children to New York.  Aunt Fred had various occupations during her working years. However, her main skills were that of a trained seamstress. She made friends easily and became a mother figure to all her young relatives, maintaining these relationships throughout her lifetime. Aunt Fred was a counselor and a confidant. She was known for her loving ways, always listened and had a kind word for everyone she encountered. Aunt Fred was widely known for sharing old Jamaican proverbs that were meant to make you think or to teach you a lesson.   Fredericka was preceded in death by her grandson, Christopher Jackson; her brothers and sisters, Euva, Rupert, Ruth, Henry, Cislyn and Mannaseh. Aunt Fred is survived by her four children, Noel, Rudolph, Theresa and Yvonne; her daughters-in-law, Vera Hall and Angela Harris and son-in-law, Chester Morris; five grandchildren, Noel Jr., Gregory, Jeffrey, Tyson and Taylor; and three great-grandchildren, Malachai, Nolan and Jasmin. She also leaves behind her brother, Raphael, her sister, Winnifred, and a host of nieces, nephews and friends. A Memorial Service for Fredericka Palmer Diah will be held on Wednesday, December 30, 2020 at 1:00 p.m. at Tabernacle Baptist Church, 418 Halifax Street, Petersburg, VA 23803. Rev. Dr. Robert A. Diggs, Sr., pastor will officiate. The service will be live streamed. A facial covering will be required along with social distancing if attending the service.

Fredericka Palmer Diah, aka Aunt Fred, age 88, was a resident of Chester, VA.  She passed away on December 24, 2020 surrounded by her family.   Fredericka Palmer Diah was born September 26, 1932 in Muir House, St. Ann, Jamaica to Hylton and... View Obituary & Service Information

The family of Mrs. Fredericka Diah created this Life Tributes page to make it easy to share your memories.

Fredericka Palmer Diah, aka Aunt Fred, age 88, was a resident...

Send flowers to the Diah family.