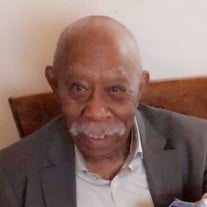 George Spencer Jr., 87, was born on April 8, 1933 to the late George Sr. and Liddie Spencer as one of the three children. George gained his wings and went home to be with the Lord on Saturday, November 21, 2020, surrounded by his beloved family. He was preceded in death by his wife, Beulah Mae Spencer; two sisters, Christine and Fannie Ruth; and a brother-in-law, Bishop J. N. Perry Jr.  George Spencer Jr. enjoyed his childhood and early adulthood in the Belvoir community of Greenville, NC, where he received his education in the Pitt County School system and met the love of his life. George eventually relocated to Virginia and was employed by and retired from Shenandoah's Milk Dairy in 1982. He also joined the Faith Temple #2 OFWB Church in Capitol Heights, MD, under the leadership of the late Bishop L. N. Forbes. George had many hobbies, some of which were enjoying the beautiful outdoors, riding his scooter when he was able, playing the lottery, and listening to gospel. On April 5, 1966, George married the love of his life, Beulah Mae Ward. George meant so much to his wife and many others. To Mae, he was her best friend, her sweetheart, the apple of her eye, and the best husband and father anyone could have asked for. God made George just for her. To his children, he was their provider, role model, strength, hero, and the best grandfather ever to his grandchildren. To many others, he was a brother, a great uncle, comedian, and friend like no other. He had love for everyone; but, most of all, he loved the Lord. He leaves to cherish his memories his two sons, Ronnie Spencer and Wilbur Spencer, both of Prince William County, VA; four daughters, Sherry Elaine Greene (William) of Dale City, VA; Jacqueline Spencer of Manassas, VA; Brenda Spencer-Wells (Danny) of Stafford, VA; Linda Power of Dale City, VA; and a step-daughter, Theresa Ann Ward of Manassas, VA. George is also survived by his eight wonderful grandchildren - Ashley Shrader (Milton), T'ara Kane, Tanisha Kane, Shaun Dingle, Alexis Spencer, Natalie Power, Justin Power, and a special granddaughter, Aliayah Wells, who was his "Lil Ma Ma" and best friend; and four great-grandchildren - Tyler Kane, Elijah Kane, Milton Shrader Jr, and Malachi Shrader. All of whom were his heart. George also leaves a host of nieces, nephews, and friends A Memorial Service will be held 11:00 A.M., Saturday, November 28, 2020 at Tucker & Fisher Funeral Home and Cremation Services, 415 Halifax St., Petersburg, VA, Rev. Dr. Antonio A. Tucker, Sr. officiating.

George Spencer Jr., 87, was born on April 8, 1933 to the late George Sr. and Liddie Spencer as one of the three children. George gained his wings and went home to be with the Lord on Saturday, November 21, 2020, surrounded by his beloved family.... View Obituary & Service Information

The family of Mr. George Spencer, Jr. created this Life Tributes page to make it easy to share your memories.