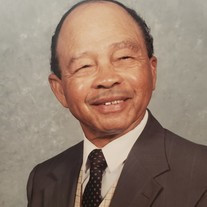 "He will wipe away every tear from their eyes and death shall be no more, neither shall there be mourning, nor crying, nor pain anymore for the former things have passed away." -Revelations 21:4 On August 6, 2020, Heyward Stanford Lovett Sr., 99, transitioned to eternal life. Mr. Lovett passed away peacefully at his home following a massive stroke. Mr. Lovett was born to the late Leola Swann Lovett and the late Lewis Alexander Lovett on July 28, 1921. He was the oldest of five sons. Mr. Lovett was married to the late Margaret Francis Winston and to this union were born four children: the late Patricia Leola Burwell, the late Bettie LaFrance Watford, Heyward Stanford Lovett Jr. (Yolanda Petersen) Diane Lynn Lewis (Elister Lewis). His youngest daughter, Michelle Leola Lovett, was born to the late Ivery Nell Woods Johnson. An analytical and methodical student, Mr. Lovett completed his education in the Hampton Public Schools and went on to obtain an associate degree. He was actively involved with educational and community endeavors, including the Boy Scouts of America, where he served as a scoutmaster for Troop 39 and a leader in the Scout Youth Program. As a troop leader, Mr. Lovett championed the virtues of fairness, honesty, combating racial injustice, and equal opportunities for all. In 2015, Mr. Lovett was honored for his more than 40 years of contributions to the community when Newport News Mayor McKinley L. Price bestowed upon him the Lifetime Citizenship Award. Mr. Lovett was a longtime employee of the Newport News Shipbuilding and Dry Dock, where he was the first Black Superintendent of Transportation. Mr. Lovett served at the shipyard from the time was he was 18 until his retirement. He was most admired for his strong leadership and fairness. He served as a mentor to many people from all walks of life. Mr. Lovett had a strong faith in the Lord and enjoyed memberships at Queen Street Baptist Church, Gethsemane Baptist Church, Miracle Temple Baptist Church, and Second Street Baptist Church where he served as an usher. Mr. Lovett was an avid reader and a lover of poetry. He enjoyed fishing, crabbing, and spending time on his boat, "Miss Michelle." He liked many genres of music, particularly Jazz. He had an appreciation for art and loved to visit museums. His intelligence was complimented by a hearty sense of humor- you could hear his laugh from a block away. Mr. Lovett had a very special bond with each of his surviving children. He adored Diane and admired her drive to get the task accomplished. He would always joke about her needing to sit her "hindpots" down somewhere. She was a devoted caregiver for her father in his last stages of his life. Heyward Jr. called his father every single day. You knew who was on the other end of the line when Mr. Lovett answered the phone with "Hey Bubbo!!" They would laugh and talk for hours on end. Their favorite words to live by were the Serenity Prayer, which states "God, grant me the serenity to accept the things I cannot change, the courage to change the things I can, and the wisdom to know the difference." Michelle was his baby girl and he would let anyone who would listen know how proud he was of her. One of his favorite photographs was of him and her when she was about two years old and he was "holding her little foot," as he would say whenever he looked at it. By the grace of God, Mr. Lovett survived long enough after his stoke to see each of his surviving children again before he passed away. Mr. Lovett was preceded in death by his parents, Leola Swann and Lewis Alexander Lovett, two brothers, Lewis Franklin Lovett (the late Rozzie Elain Lovett) and A. Bernard Lovett (Emily Scarborough Lovett), and two daughters, Patricia Leola Burwell and Bettie LaFrance Watford. He is survived by his brothers Dr. Walter Lovett (the late Lillian Williams Lovett) and Wilbert Lovett Sr. (Jeanette Conyers Lovett), his children, Heyward Lovett Jr. (Yolanda Peterson), Diane Lynn Lewis (Elister Lewis), Michelle Lovett, and son-in-law Joe Watford; and a host of grandchildren and great-grandchildren. In a final act of selfless service, Mr. Lovett donated his body to science so that others may learn from him in death as they did in life. Near the end of his life, Mr. Lovett received exemplary care from a host of medical professionals. The family is grateful to Drs. Mfone and Hoyt, Riverside Hospice Nurse Shelia Beacham, and Nurse Next Door Inc. under the direction of Kaylene Landers for their care and support. CNAs Melissa Applewhite, Electra Brooks, Angel Owens, and Adreinne Simmons deserve special acknowledgment for the love, care, and support they extended to Mr. Lovett and his family during his illness. The family is appreciative of Mark Fisher and Valerie Glenn at the M.E. Fisher Funeral Home for their generosity and guidance during this difficult time.

"He will wipe away every tear from their eyes and death shall be no more, neither shall there be mourning, nor crying, nor pain anymore for the former things have passed away." -Revelations 21:4 On August 6, 2020, Heyward Stanford Lovett... View Obituary & Service Information

The family of Mr. Heyward Stanford Lovett, Sr. created this Life Tributes page to make it easy to share your memories.

&quot;He will wipe away every tear from their eyes and death shall...

Send flowers to the Lovett family.