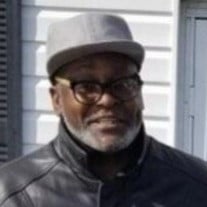 Elder James Emanuel Turner, known to many as, "Plute" or "Tenny 8", transitioned on Wednesday, November 25, 2020 at VCU/MCV Medical Center, Richmond, Virginia. James was born on March 17,1956 to the late Mandy and Vernesteen Turner. James graduated from Sussex Central High School, Sussex County, VA.  After high school, James went on to further his education at Coppin State College, Baltimore, MD. He was employed for a short time in Williamsburg, Virginia. James was baptized at an early age and joined Union Hill Church Sedley, Virginia.  As James grew older, there was a calling on his life to be a minister.  He was later ordained and was mentored under Reverend Charles Cypress, Wakefield Christian Outreach Wakefield, Virginia.  James loved the Lord and would often speak of how blessed he was.  He would often speak about how the Lord had brought him through so much and how he was so blessed to tell it every where he went.  One of his great achievements was when he preached a Black History Program in Wakefield at the Wakefield Christian Outreach in February 2020 with Reverend Charles Cypress.  He was so excited to be blessed with that wonderful opportunity.  Elder James Emanuel Turner aka "Plute", "Tenny 8", "Exotic", "Crab Guy", was a man with many names, because of the good things he did and by what he was known for.  James also played ball with the Wakefield Braves, the best baseball team in the league.  He loved the game and was the best Shortstop, Pitcher and all around player there was. A lot of young people in the neighborhood looked up to him.  Later on, James started cooking crabs and people came from all around just to get his crabs.  The batter was so good!  He had people from Sussex, Surry and Ivor that would come just to get his crabs.  He loved It so much! James had just began umpiring for the Little League Baseball Team this summer '2020', and he loved going every Saturday and Sunday umpiring the games for Danny Edwards with Ron Lee Jones, Calvin Langford and Ollie Riddick.  They had a lot of fun. James leaves to cherish his memories three daughters, Ladonna King of Dendron, VA, Shenna Royal of Federickburg, VA and Sheniqua Gay of Wakefield, VA; six grandchildren, Ladonna Mark, Jr. and Xavier Hamlin, both of Dendron, VA, (Shenna) TeShena, Iviance, Iran and Iyan; six sisters, devoted Vernice Butts of Wakefield, VA, Brenda Swarn (Reginald), Gloria Turner, Barbara Banks all of Waverly, VA; Cynthia Jones (Leonard) of Petersburg, VA and Gwen Burley of Killeen, TX; two brothers, devoted Wayne Turner of Wakefield, VA and Willis Turner of Philadelphia, PA; two brothers-in-law, Reginald Swarn of Waverly, VA and Leonard Jones of Petersburg, VA; nieces, Vernice McMillan (Ira) of Windsor, VA, Wilkenda Smith (Juanel) of Stony Creek, VA, Keyonna Swarn of Petersburg, VA, Marcia Turner of Waverly, VA and Lakita Warren (Earl) of Zuni, VA; nephews, Wilkeidra Turner of Petersburg VA, Corey Butts of Wakefield, VA, Richard Banks, Ronald Geter and Alex Banks both of Manhattan, NY, Richard Geter of Charlotteville, VA, Wallace Turner of Petersburg, VA, Orlando and Darrell Turner of Killen, TX; three aunts, Laura Tonkins of Wakefield, VA, Dorothy Stovall (Willis) of Yonkers, NY and Joyce Turner of Wakefield, VA; two uncles, Lloyd Brown (Fannie) of Baltimore, MD and Willie Brown, Jr. (Sally) of Yonkers, NY; along with a host of other great nieces, friends and family.  James had several devoted and long time friends to include: Freddie Stringfield, Carroll Stith and Calvin Langford.  Some of his other close friends were Renda Mudrick, Annie Bains, Shavi Thweatt, Calvin Stith and Charles Sumler. In the words of dearly beloved, Elder James Emanuel Turner, "Plute", "I don't worry about what people say about me, they're going to talk anyway and ain't gonna do nothing to help you!" A Graveside Celebration of Life will be held 1:00 P.M., Friday, December 4, 2020 at the Union Hill United Church Of Christ Cemetery, 16192 Union Hill Rd., Sedley, VA. Public viewing will be Thursday, December 3, 2020 from 12:00 P.M. - 8:00 P.M. at Tucker & Fisher Funeral Home and Cremation Services, 415 Halifax St., Petersburg, VA. A face mask/covering will be required while attending all services and viewings.

The family of Elder James E. Turner created this Life Tributes page to make it easy to share your memories.

Elder James Emanuel Turner, known to many as, &quot;Plute&quot; or &quot;Tenny...

Send flowers to the Turner family.