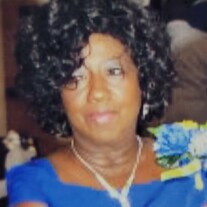 Janice Althea Overby Miller was born to the late Lula Mae Faines Overby and Vennie Willard Overby, Jr. on September 12, 1956 in Newport News, VA. She was the first of ten (10) children born of this union and she lived all her early years at home, being just that - the "ELDEST". Janice was preceded in death by her sister, Christine Alfreda Overby, and her loving husband, Burnis Miller. During her earlier years, she graduated from Ferguson High School. She later attended the College of Hampton Roads. Janice had various jobs, but she really thrived at her job as a Bookkeeper for the Hampton Roads Be-Lo Grocery Stores. She obtained gainful employment with the City of Newport News as a Facilitator for the Adult Learning Program. She truly enjoyed this position as it gave her the opportunity to work with senior citizens throughout the city. Just planning/coordinating trips, recreational and educational activities for her seniors, became one of her daily outlooks. It also gave this feisty, busy-bodied, whirlwind a chance to be in control of a group of people - something her siblings and friends knew her well for. It seemed that her seal of approval had to be placed on everything involving her family whether it was a meal plan, holiday activity, or simply how one was dressed or wore their clothes. Janice was brought up knowing the LORD and she faithfully practiced her beliefs throughout her life. Janice leaves to cherish, her memories her daughters, Trishalyn Bunting (Tracey) of Newport News and Sa'Sha Miller of Houston, Texas; four (4) grandsons and one (1) granddaughter; five (5) sisters: Doreen Overby, Thyra Y. Duck (David), Beverly McGowan (Hilliard - deceased), Susie White (David), Michelle Carter (Vincent); four (4) brothers: Edward Allen Faines, Vennie W. Overby, III (Carrie), Christopher Overby (Dorothy - Deceased), and Michael Overby (Tina), all of Newport News. She further leaves a host of nieces, nephews, uncles, aunts, and cousins who loved and remembered her as "Juicy". To have known Janice was to have loved her and to have dealt with something too.

Janice Althea Overby Miller was born to the late Lula Mae Faines Overby and Vennie Willard Overby, Jr. on September 12, 1956 in Newport News, VA. She was the first of ten (10) children born of this union and she lived all her early years at... View Obituary & Service Information

The family of Ms. Janice Althea Miller created this Life Tributes page to make it easy to share your memories.

Send flowers to the Miller family.