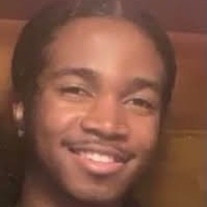 Jaylen Deshaun Johnson (Jaylen J aka Jay) 21, of Charlotte North Carolina, passed away on Sunday, September 19, 2021. He was born on February 19, 2000, the son of Damika (Small) Willis and Tavius Johnson. Jaylen was born in Newport News, Virginia, and spent the first six years of his childhood in Newport News, until the family decided to relocate to Maryland in late 2006. North Carolina would later become his home, as the family would settle in several cities across the state, over the years. Jaylen was a bright great kid who enjoyed having fun and being outdoors with friends and family. He played baseball and football as a youth and was known as a very talented player in both sports and developed many friendships through sports. Jaylen graduated on June 14, 2018, from Rocky River High School in North Carolina at the age of 18. He was ambitious and focused on his dreams to become an entrepreneur and start his own clothing line. Jaylen would go on to attend Nursing School at Central Piedmont Community College and received a certification in Phlebotomy in April of 2021, which he planned to use while studying to pursue a career as a Registered Nurse. Jaylen was the first grandchild and first nephew on both sides of his family and was loved and adored by all. He touched so many people's hearts and had an impact on so many lives in different ways. Jaylen, a shining star, was stylish, vocal, and well known through his social media platforms. His laugh was contagious and his smile melted your heart. Being as talented as he was, he aspired to become famous. At age 21, Jaylen lived an exemplary life. Jaylen was a Christian, who loved God and praised him daily. Jaylen brought joy to everyone he met. He loved all his siblings dearly. Jaylen was truly loved in every way by his family, friends, and coworkers. He will be missed by all! Though he will be missed, We know that while absent from the body, Jaylen is present with the Lord. He is preceded in death by his great grandmother Shirley Mae Hicks, Grandfather Andra' Bond Sr, and uncle's Andra' Bond and Taiwo Douglas-Wells. Jaylen is survived by his parents Damika Small-Willis (Rachid) and Tavius Johnson (Tameka), his siblings, Quintel Wilson Jr, Quinton Wilson, Christion Wilson, Malik Johnson, Kiora Osborne, Deonna Guild, Kevin Willis, Makiyah Willis, and Chanel Wilson. Grandmother's Diane Small and Sharon Johnson, Grandfather's Lorenzo Johnson and Joseph Douglas-Wells, Uncles; Samuel Fowler, and a very Special Uncle, Marcus Johnson (Melonie).

The family of Jaylen Deshaun Johnson created this Life Tributes page to make it easy to share your memories.

Send flowers to the Johnson family.