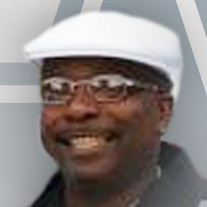 Joseph Holloway Jr., known to everyone as Jo-Jo, was the coolest guy you could ever meet. Jo-Jo was born July 5, 1971 in Wilson, NC to Joseph and Virginia Holloway. He was the youngest of five children. Jo-Jo was always a character even as a child. He had a big personality even though he may have been the smallest in the room. Jo-Jo was a great husband, father, uncle and friend. He always had a positive attitude and was the life of the party. Jo-Jo only stood 5'4, but his charisma made him 10 feet tall. He would say, "I'm so nice they named me twice." That smile of his would brighten any room. Everyone that knew him loved him. Jo-Jo attended Margaret Hearne Elementary School in Wilson, NC until the family moved to Hopewell, VA where he attended Hopewell Public Schools. From there he attended Chesterfield Technical Center where he studied Plumbing. Jo-Jo did plumbing work until he took over care of his wheelchair bound son. Jo-Jo was a member of his father's church, Refuge C.O.O.L.J.C., Hopewell, VA. He later moved to Durham, NC where he received the gift of the Holy Ghost, speaking in tongues as the spirit gave utterance at Mt. Zion Christain Church under the leadership of Minister Fozart. He later moved back to Virginia and joined Grace Alive Ministries pastored by Elder Rodney Williams, Sr., and remained a member throughout his battle with his illness. Jo-Jo's health started to decline in early May. He fought for two long months until his fight became a battle. On Wednesday, July 22, 2020, Jo-Jo answered the final call of God and went home to be with Him. He was preceded in death by his parents, Joseph and Virginia Holloway, and his two sisters, Wanda Holloway Walker and Debora Holloway Williams. Jo-Jo leaves to cherish his memory a loving wife and best friend, Katina Holloway; six children, Demario Cooper (Chantal), Joseph Holloway III, Kristina Holloway, True Holloway, Rasheria Holloway and Christopher Holloway; one grandson, Derek Norris Jr. Little Derek loved his Pop-Pop more than anything in the world. He also leaves one sister, Lady Michele Eddington; one brother, Clarence Holloway (Doris); a host of nieces, nephews, cousins, aunts, uncles and friends. He will be truly missed, but we rejoice that he has transitioned from labor to reward. A Homegoing Celebration will be held 11:00 A.M., Saturday, August 1, 2020 at Grave Alive Ministries, 8820 Jefferson Davis Highway, North Chesterfield, VA with Pastor Rodney Williams, officiating. Interment will follow at Mt. Sinai Community Cemetery, Prince George, VA. Service will be live streamed. Public viewing will be Friday, July 31, 2020 from 10:00 A.M. - 8:00 P.M. A mask/face covering will be required while attending all viewings and services. Please join us in comforting the Holloway family by uplifting them with your prayers.

Joseph Holloway Jr., known to everyone as Jo-Jo, was the coolest guy you could ever meet. Jo-Jo was born July 5, 1971 in Wilson, NC to Joseph and Virginia Holloway. He was the youngest of five children. Jo-Jo was always a character even as a... View Obituary & Service Information

The family of Mr. Joseph Holloway, Jr. created this Life Tributes page to make it easy to share your memories.

Joseph Holloway Jr., known to everyone as Jo-Jo, was the coolest...

Send flowers to the Holloway family.