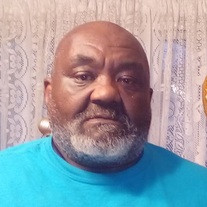 On Sunday. April 24, 2022 our hearts were saddened by the passing of Joseph Linroy Anderson. Joseph was born to Joseph and Tishie Anderson on June 30, 1957 at Whitaker Memorial Hospital in Newport News, Virginia. Joseph attended Dunbar Elementary School, Newport News, Virginia and graduated from Warwick High School in Newport News, Virginia. Shortly after graduation, JoBo as we lovingly referred to him, enlisted in the United States Army for a period of time. After his discharge from the military, JoBo worked at Boat Harbors in Newport News, Virginia and other odd jobs in the city. He also helped with food distribution at Greater Works Church located at 1711 Madison Avenue, Newport News, Virginia. Until his health began to fail, Jobo loved his family with all his heart. He would do anything that was asked from him to support and protect the ones that he loved the most. He lived life to the fullest and enjoyed everyday life. Jobo was very close to his mother and would do anything for her. We are saddened that he has left us, but we find comfort in knowing that he is once again with his mother and father. On May 13th we will send him home to his mother on her birthday. JoBo leaves his loved ones to honor his homegoing and celebration of his life a sister, Mrs. Veda Anderson Perry (Alphonso) San Antonio, TX; nephew, Reginald Perry (Jackie) San Antonio, TX; Mrs. Regina Anderson Hawkins (William); nieces, Angela Martin (Bernard) Newport News, VA and Tiffany Grate (Michael) Hampton, VA; a host of great nieces and great nephews, Mikayla, Avaya Cassidy (Chris), Sammie, Julius and Reggie, Donnie and Ben; and a very special friend forever, Ms. Sandra Watkins and family. Thank you for all of your love and support. A viewing and visitation will be held on Friday, May 13, 2022 from 5pm -7pm at M.E. Fisher Funeral Home, 2117 Madison Ave., Newport News, VA.

On Sunday. April 24, 2022 our hearts were saddened by the passing of Joseph Linroy Anderson. Joseph was born to Joseph and Tishie Anderson on June 30, 1957 at Whitaker Memorial Hospital in Newport News, Virginia. Joseph attended Dunbar Elementary... View Obituary & Service Information

The family of Mr. Joseph Lenory Anderson created this Life Tributes page to make it easy to share your memories.

Send flowers to the Anderson family.