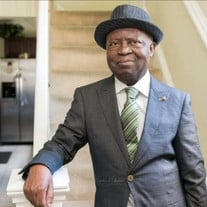 Jules B. Kameni sadly passed away on October 13, 2021, at Sentara Norfolk General Hospital after a long and courageous health battle. Jules was born in 1947 in Cameroon in the Village of Badoumla and spent many years living in different cities throughout the western region of Cameroon, before settling in the economic city of Cameroon, Douala, where he worked as an accountant. Jules met his lovely wife, Monique Ngounou Kameni, in Kekem, Cameroon, and married her in 1977. they lived in Douala where they raised a beautiful family of six children, surrounded by many extended family members. Jules continued to work as an accountant until unable to do so due to his worsening health condition. Jules moved to Norfolk, Virginia with his wife in 2017 where he continued to follow medical treatment. Surrounded by loving family and friends, despite his sickness, Jules continued to bring a smile to everyone's face through his unexpected and contagious bursts of laughter. Jules was a believer and lived a life devoted to God. He enjoyed reading, especially the Word of God. His favorite hymn was "Qui me rel'eve dans mes chutes". Although sports weren't his passion, staying informed was, Jules loved to sit quietly and watch the news, catching up on the latest information. but if you wanted to get him moving, serve a warm plate of "taro" his favorite meal, always did it. Jules B. Kameni leaves behind, a widow, six lovely children, many grandchildren, and a large extended family who will forever miss his presence and never forget him. "After 43 years of living together, he was my father, my friend, we always got along. Now that the Lord has decided to call him home, I pray that he may continue to watch over him like He always has."~His loving bride, Monique Ngounou Kameni

Jules B. Kameni sadly passed away on October 13, 2021, at Sentara Norfolk General Hospital after a long and courageous health battle. Jules was born in 1947 in Cameroon in the Village of Badoumla and spent many years living in different... View Obituary & Service Information

The family of Mr. Jules Bernard Kameni created this Life Tributes page to make it easy to share your memories.

Send flowers to the Kameni family.