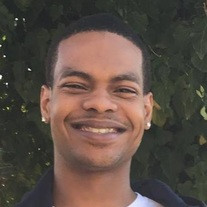 Kevin Delmarrio Williams, 33, of 535 South Dunlop Street, Petersburg, VA, went home to be with the Lord and his dear mother on October 5, 2020. He was born July 3, 1987 to Theophilus D. Lewis and the late Shelia Allen. Kevin graduated from Thomas Dale High School in 2006. Kevin loved sports, growing up Kevin would always play football with his friends and family at Harrowgate Park. He was always the quarterback for both teams. You would have thought he was the black Andrew Luck. He favorite football team was the Indianapolis Colts. Whenever you thought Kevin, the first thing that came to mind was ESPN. He knew his sports, ALL his sport! It wasn't a sport, stat, team or player that he didn't know about. No one wanted to argue sports with him, because everyone knew Kevin knew his stuff. It was as if it was his job to know them like an ESPN reporter. It was times Justin (brother) would ask him random questions about sports and he would be able to answer every last one of them. Kevin loved being a coach for his son's sport teams. Being there to cheer his son on was his everything. Kevin loved to spend as much time as he could with his family, Morgan and his children. Kevin had a strange obsession with hot sauce. He would have more hot sauce on his plate than he would have food. His food would be swimming in hot sauce. Whenever we couldn't find the hot sauce, we knew who had it and we would tell him to go get the hot sauce out of his room and he would laugh, then go get it out of his room. Kevin also loved to suck his thumb. No one could get him to grow out of sucking his thumb. Our grandmother use to tell him all the time that she was going to put hot sauce on his thumb to get him to stop. One time, Aunt Sam put hot peppers on his finger to see if he would stop, but all he did was cry for hours until the pain went away then he was right back at sucking his thumb again. We believe this was why he was so in love with hot sauce. Kevin will truly be missed. He leaves to cherish his precious memories his three children, Miyah Johnson, Jaiydiyn Williams and Kannin Williams; six brothers, Kenard Williams, Ricardo Williams, Justin Williams, Xtreme Jones, Theophilus Clark and Vashod Lewis; stepmother, Valria Lewis; special friend, Morgan Doss; three aunts, Devern Webb, Sandilen Stewart and Samantha Crump; numerous cousins, Theodore Black, Trevon Black, Jason Black, Shawn Black, Jerrelle Crump, Dwight Stewart, Antoine Stewart, Sean (Katherine) Stewart, Nigel Stewart, Desiree Stewart, Tamika Black, Charissa Cuozzo-Ewdards, Kyra Stewart, Tyeisha Cuozzo and Sean Stewart, Jr.; a host other relatives and friends. A Celebration of Life for Kevin along with his mother, Mrs. Shelia Allen, will be held 2:00 P.M., Saturday, October 10, 2020 at Tucker & Fisher Funeral Home, 415 Halifax St., Petersburg, VA with Rev. Dr. Nathan Quick eulogizing. The service will be live streamed. Public viewing will be held, Friday, October 9, 2020 from 10:00 A.M. - 8:00 P.M. at the funeral home. A face mask/covering will be required while attending all services and viewings.

Kevin Delmarrio Williams, 33, of 535 South Dunlop Street, Petersburg, VA, went home to be with the Lord and his dear mother on October 5, 2020. He was born July 3, 1987 to Theophilus D. Lewis and the late Shelia Allen. Kevin graduated from... View Obituary & Service Information

The family of Mr. Kevin Delmarrio Williams created this Life Tributes page to make it easy to share your memories.

Send flowers to the Williams family.