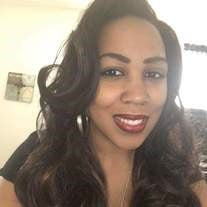 Reflection of Life Latoya Lynn Forte' Affectionately known as "Toy" LaToya Lynn Forte was born November 4, 1981 to Ronald Harris & Teresa Knight in Newport News, Virginia, where she then became a member of the W.D Williams Evangelistic Center in Hampton, Virginia. Latoya leaves a loving life to many that she encountered. When she walked into a room, she lit up with her upbeat presence. The family was her #1 priority, especially her children. She was always active with her children's education and activities. She would volunteer wherever she needed between the three of their schools. She also acted as a team mom on her son's football team. She was incredibly involved with Tayonna's and Breanna's school on many platforms as well. If she saw someone in need, she was right there in any capacity that she could be. She loved cooking, baking homemade rolls, signature Banana Pudding from scratch, and other recipes that she loved to prepare. She prided herself in making her home comfortable and nicely decorated. Everything she did was done in excellence and humbleness. A wonderful daughter, mother, sister, cousin, and friend. She will be tremendously missed by so many. She is preceded in death by her maternal grandparents, grandfather, William H. Knight, and grandmother, Lillie B. Knight; and her paternal grandmother, Arelia Harris. She leaves to cherish her children Tayonna, Breanna and Charles III "Lil Chucky" Forte'; her mother, Reverend Teresa Knight; her father, Ronald Harris; stepmother, Barbara Harris; Brother, William Roberts III; stepbrother, Brian Lawson; her paternal grandfather, Hubert Harris; her uncle, Reginald Harris; aunts, Lossie Dupree Bryant, Glenice Cherry and Wanda "Ann" Ashcraft; Godfather, Bobby Barner; friend and father of her children, Charles "Chuck" Forte' II. And a host of extended aunts, uncles, cousins family, and friends.

The family of Ms LaToya Lynn Forte created this Life Tributes page to make it easy to share your memories.

Send flowers to the Forte family.