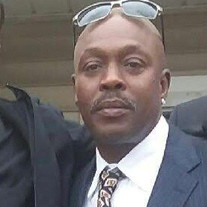 Levin "Luv" Grimes, age 60, passed away on April 17, 2021, in Newport News, Virginia. He was born on October 5, 1960, to the late Jacqueline and William Grimes Sr. Mr. Grimes attended Warwick High School in Newport News, Virginia. He was a wonderful cook and loved to prepare dishes for his family and friends. He was a former employee of the Cheesecake Factory in Richmond VA and had been a current employee at the Smithfield Meat Packing Plant in Smithfield, VA. Mr. Grimes. was a loving father, grandfather, brother, nephew, and cousin. Mr. Grimes leaves to cherish his memory, is his daughter Miracle Woodberry and his grandson Jailen Woodberry of Louisburg, NC. His brothers; William Grimes Jr (Hope) of Portsmouth, VA, Todd Glasco (Georgia) and Ralph Singleton (Cynthia) both of Hampton, VA; Nikcoy Henderson of Newport News, VA His sisters; Cecil Hunt (Duane) of Woodbridge, VA, Phyllis Singleton, Adrienne Henderson, and Viola Peartree of Newport News, VA; Sharon Monroe and Sheila Copeland of Hampton VA; Anthenette Singleton of Clemson, SC; Annette Singleton of Georgia; Gloria Band of Minot, ND; and Sherly Shannon of Richmond, VA. One Aunt, Claudette Jennings of Kissimmee, FL. Three uncles; Joseph Taylor(Linda) of Suffolk, VA, Bruce Henderson of Chesterfield, VA, and James Burton (Nelly) of Niceville, FL. His special friend, Lydia Osbourne of Richmond VA. A host of nieces, nephews, and friends. Mr. Grimes was preceded into eternal rest by his mother and father, grandparents James and Mattie Burton, and brother Victor Peartree. Although we wanted Levin to still be here with us, God needed him more. We will continue to remember the good times we had with him. And he will forever be in our hearts.

The family of Mr Levin Grimes created this Life Tributes page to make it easy to share your memories.

Send flowers to the Grimes family.