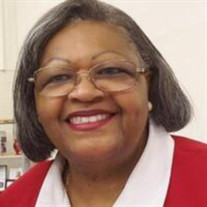 Linda Lorraine Lassiter Lucas Bey peacefully transitioned at home from this realm on February 14, 2021, surrounded by her Sister, Renita Howard, son, Leonard O Lassiter Bey, daughter-in-law, Harvetta Lassiter Bey, and her grandchildren. Linda Lorraine Lassiter was born to Roscoe and Fannie Lassiter on January 14, 1951, in Newport News, Virginia. She was educated in the Newport News School System and graduated from Huntington High School in 1969. Linda L. Lucas enrolled in Strayer University graduating in 2008 with an Associates in Arts in Business Administration and she also received her Bachelor of Science Degree in Business Administration in 2011 while making family history by graduating with her son, Leonard (Boo) Lassiter as he received his Bachelor of Science Degree in Criminal Justice on the same stage. Linda was a faithful member of Rising Star Christian Church for more than 60 years where her Pastor is Clifton Lassiter. Linda was a Past President of the RSCC Nurses Guild, Trustee, Treasurer, and Financial Secretary. She was also a member of the Order of the Eastern Stars; Associate Grand Matron of Virginia State Grand Chapter, Past Grand Warder and Past Grand Ways and Means Chair, Past Grand Trustee Chairman; Early Rose Chapter #5- Past Worthy Matron and Treasurer; Esther Court #2 Exalted Ruler Order of Amaranth- Past Royal Matron; Fidelity Court #1 Heroines of Jericho- Past Secretary; Deborah Council #1 Lady Knights of Templar -Past Worthy Chief Counselor; Venus Court #1 Daughter of Sphinx - Most Worthy Grand Matron; The Original Supreme Grand College Rose of Seven Seals Board of Directors member (secretary); Rose of Seven Seals Hedric Edney College #1 -Past Most Excellent Rose; Kiwanis International Hampton Roads Chapter, Past President and Inter Club Chair; Peninsula Home Builders Association Peninsula Apartment Council- Past Vice President; Florida Agricultural Mechanical University Hampton Roads Alumni Association (FAMU) Past President; Hampton Roads American Cancer Society Minority Task Force President; Past American Legion Auxiliary member of Harry S. Foster Post 67 and current member of American Legion Post 368 Denbigh; Whitaker Memorial Hospital past Board member and Riverside Regional Medical Hospital, Past Board member; Senior Registered Apartment Manager, RAM and Real Estate Board Member Licensed Salesperson. Linda’s work experience began in 1971 at Fort Monroe Tailor Shop where she worked as a seamstress for one year then she was employed by Century 21 Nachman Realty from February 1972 to October 1987. She began her wonderful career with Abbitt Management, LLC, from November 1987 until December 2019, retiring due to a diagnosis of cancer. She worked for the late Dr. Alvin Bryant. M.D., for 30 years in his office and they conducted health screenings all over the Tidewater area and Southside in hopes of saving lives. She was a political campaign manager for the late Dr. Alvin Bryant, M.D., and a poll worker for 40 years. Linda was also an advocate for the NAACP, Cancer and Sickle Cell Organizations. Linda was a mother to many college students who lived with her while they attended Hampton University. She was a teacher to many and shared her vast knowledge so freely. Linda was an advocate for education helping neighborhood high school students secure scholarships to FAMU where she was a Board Member. She also served as an Ambassador for Strayer University during the graduation ceremony every year until she became ill in 2019. Linda was so giving, loving, funny, articulate, kind, and was always willing to help anyone. She loved to cook and would feed the world—near or far. Many people visited her home and would go back to eat any day, any time because something was always on the stove. Linda never met a stranger, she hosted cookouts for 40 years during the Hampton Jazz Festivals. Once she fed over 500 people over a 3-day weekend free of charge with the help of her mother Fannie, son Leonard (Boo) sisters Necie, Renita, and Rocky, Aunt Vergie, Aunt Ann, best friend Elizabeth Wilson, Renae Peoples, Synthia Randolph, Annie Debnam, and Randy Bowman. Guests came yearly from as far as Africa. Linda Lassiter Lucas learned that she had a Nationality and declared her Nationality in December 2019 wherein she annexed the title of Bey onto her name. She helped found and establish the United States of America Republic Community Outreach, which is a Moorish American Humanitarian Organization providing, housing, education, food, and transportation amongst other things to aid in uplifting the fallen humanity of which her son is the President. She served as a U.S.A.R.C.O. Board Member in the capacity of Conflict Resolution Director until she transitioned. Linda spent her last days surrounded by her loving and devoted son, Leonard O Lassiter Bey, and her daughter (as she called her) Harvetta, her sister, (whom she talked to mostly every day), Evangelist Renita Howard, who rushed to her bedside, her grandchildren and great-grandchildren whom she adored, and her dedicated nurses and aides. “Grandma Linda” as she was lovingly called by her grandchildren, received extra, extra special love and care from her granddaughters, Diamond, Jonica, and Jhanna Lorraine who is named after her. Linda is predeceased by her father Deacon Roscoe Lassiter and sister Darial (Necie) Cockerham. She leaves to cherish her memories, one son, Leonard (Boo) Lassiter-Bey (Harvetta), Mother Deaconess Fannie Clark Lassiter, Brothers, Elder Clifton (Arlene) Lassiter and Roscoe (June) Lassiter, Sisters, Renita (Neda) Howard (Stan), Marvis (Vern) Savage (Robert) and Rosalyn (Rocky) Lassiter. Grandchildren, Carlecia Perry-Lassiter Bey, Genova Perry-Lassiter Bey, Joshua Perry-Lassiter Bey, Cornell Perry-Lassiter Bey, Jonica-Lassiter Bey, Jhanna-Lassiter Bey, Davon-Lassiter Bey, and (her special baby) Diamond Lassiter Bey, Jamal Williams, Leonard Lassiter II, Adanna Lassiter, and Great Grandchildren, Xzivier, Benjamin, Kehlani and RJ, a devoted best friend/Sister, Elizabeth (Rudy) Wilson, who did everything she could to help her for over 32 years! aunts, uncles, cousins, friends, Masonic Brothers, and Eastern Star Sisters. Special cousins Mozelle (Lois) Jarrett, David Deloatch, Wendell (Don)Lassiter, and Jimmy Howard (Little Jimmie) Clark, Jr. Special niece Ericka Corbin Lassiter (Kwamie-deceased). Dear and close friend and confidant Brother Arthur Smith Dallas, Texas.