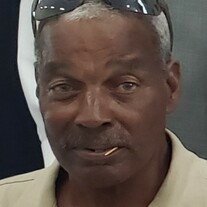 Linwood Alton Hundley, son of the late Winston H. Hundley Sr. & Myrtle V. Hundley, was born on February 20, 1955, with his twin brother in Newport News, VA. He was the third of eight children. Linwood was called home by the Lord to his final resting place on December 14, 2021. He and his twin brother came into the world together on the same day and were called home on the exact same date thirteen years apart. As a young boy, he attended Second Baptist Church (now Miracle Temple) where he became a Boy Scout. Linwood later became a member of the United House of Prayer For All People and was a member of the Original McCollough Cadets, and also a Color Guard in the Grace Emmanuel Band. Linwood attended Newport News Public Schools and was a member of Huntington High School "Last Sophomore Class of 1973". He had a passion for hardwood flooring, and he worked for several companies including Pete's Flooring, J & J Flooring, Jackson and Jackson Enterprises, and Helen Floor Service. Linwood was affectionately known as "Twin" to family and friends. He was kindhearted, family-oriented, and enjoyed life. He had a big heart. When anyone needed help with anything he was the first to lend a helping hand. But, if he ever used your equipment he would always return it broken and say "I didn't break it". To know Linwood was to love him. We are thankful for the gift of Linwood Hundley. He was preceded in death by his father Winston Hundley Sr; his twin brother Leonard; two sisters Tanya Hundley and Joyce Hutch; his son Tyron Stith; a nephew Michael (Herk) Hundley; his maternal and paternal grandparents; and numerous uncles and aunts. He leaves to cherish his memories his mother, Myrtle Hundley of Hampton, VA; daughter Kenikia Mack-Armstrong of NN, VA; son Dyron Stith (Rokeena) of NN, VA; two sisters, Cynthia Cooke of NN, Va; Anglea Hundley of Hampton, VA; three brothers, Michael Hundley (Carolyn) of NN, VA; Winston Hundley Jr. (Ida) of Smithfield, VA; Kenneth Hundley (Tracy) of NN, VA; two special granddaughters whom he loved dearly Alexis Armstrong and Jaden Morris of NN, VA, along with 12 other grandchildren; an uncle, Bernard Green (Patricia) of Va Beach; a host of nieces and nephews; a god sister Renee Withers of Washington, DC. Linwood was also treasured by his special friend Stephanie Scott and a host of other relatives and friends.

Linwood Alton Hundley, son of the late Winston H. Hundley Sr. & Myrtle V. Hundley, was born on February 20, 1955, with his twin brother in Newport News, VA. He was the third of eight children. Linwood was called home by the Lord to his final... View Obituary & Service Information

The family of Mr. Linwood Alton Hundley created this Life Tributes page to make it easy to share your memories.

Send flowers to the Hundley family.