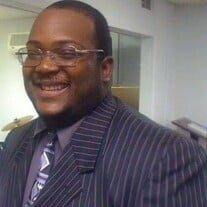 Michael Junious Carter 42, entered into eternal rest on Saturday, February 5, 2022. Michael was born March 9, 1979, to the late Barbara Elaine Carter-Smith and Junious Rawles. He was the youngest of his four siblings. He is affectionally called "Mikey" by his family and close friends. Michael gave his life to Christ as a young adult and later was ordained as a Minister at Love and Hope Christian Church, where he served under the leadership of Pastor William Watson III. Michael was educated in the Newport News Public School System and later earned a Bachelors's and Master's Degree in Counseling from the University of Arizona Global Campus. Michael worked various jobs but had recently accepted employment with the Hampton-Newport News Community Services Board as a Peer Support Specialist. Michael was always a quiet, gentle spirit. He had a passion for learning and loved to read. He loved technology and enjoyed staying connected with family and friends near and far on social media. He was the Washington Redskin's #1 fan and he made sure everyone knew it. He loved to laugh, loved to talk about politics and current events. and most importantly and nearest to his heart, he loved GOD. Michael had a servant's heart. He was a caregiver for several relatives throughout the years, helping them in their last days. He ministered to friends and family and was a true witness to the goodness of God. Michael did not have any offspring but he loved his nieces, nephews, and God Children as if they were his own. He will be sorely missed. He leaves to cherish his memory; one sister, Felecia E. Carter (Tony); three brothers, Melvin D. Carter II, Gerald L. Carter, and Marc Bunch. Uncles; Charles E. Crawley Jr. (Deborah) and Roy Braxton, aunt; Annette Crawley, Nine nieces, and nephews; Shatima E.Johns, Melvin D. Carter III, Yasmen M. Peartree, Quadriyan Cephas, Vivica G. Gray, Nicky Bowyer, Dylan Bowyer, Camren Carter, and Chantz Carter, four great-nieces; Nevaeh Reynolds, Madisyn Best, Ayvah and Layla Taylor and one great-nephew, Melvin D. Carter IV; cousin and confident Benjamin Rawles, friend Seneca Woods Sr., God Children Seneca Woods Jr., and Alyssa Walker, and a host of cousins, other relatives, and friends.

Michael Junious Carter 42, entered into eternal rest on Saturday, February 5, 2022. Michael was born March 9, 1979, to the late Barbara Elaine Carter-Smith and Junious Rawles. He was the youngest of his four siblings. He is affectionally called... View Obituary & Service Information

The family of Mr. Michael Junious Carter created this Life Tributes page to make it easy to share your memories.

Send flowers to the Carter family.