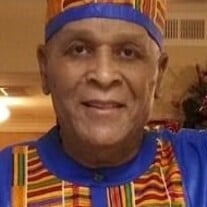 The Lord Giveth And The Lord Has Taken Away Today is the time that the Bible speaks about in the book of Ecclesiastes, a time to be born and a time to die. Nyiatumba C. Okoro was born on January 9, 1950, to the late John L. Shields Jr. and the late Nancy Mae Mitchell Shields. Duke was known by everyone. He was born in Scotland Neck, N.C, and lived in Newport News all his life. He retired from the Daily Press Inc. as Transportation Manager. His greatest joy was accepting Jesus Christ as the Savior of his life in 1993; as a member of the United House Of Prayer For All People in Hampton, under Apostle L. Flowers. He was a Grace Soldier of the Cross Security for Bishop S.C. Madison. A few years later, he was ordained a 70th Elder by Bishop S. C. Madison in Philadelphia, Pa. He remained a member until 2006, when he was called back to the streets to take the Gospel to all those he had left in the streets, with the blessing of Bishop S.C. Madison. Nyiatumba Okoro went back and worked in the community as Co-Founder & President of Restore Inner City Peace, and Vice President Of Shields Of Faith Inc., with The Best Kept Secret; one of the best community groups he said he had ever worked with. He worked to save our kids from killing one another. He worked as the Director of Operations for Peace-N-The-Street, Summer USDA Feeding Program servicing over 4200 kids a day from 2008 to 2011. Another part of being involved in the community, Nyiatumba Okoro went to the prisons and preached, worked with inmates, wrote letters, and went before the parole board on behalf of inmates. He was a Community Builder without a doubt and one who cared greatly about that community. With his wife of numerous years by his side, they gave away every year, one thousand dollars in school supplies and gift cards to the kids. He worked with Chief J. Fox and the N.N.P.D to find ways to address the crime in the city and lower East End, along with the Sheriff's Department, Chief Gabe Morgan, Commonwealth Attorney Howard Gwynn, and Assistant Chief Lorenza Sheppard. He lived the word of God and would correct you if you said something wrong, not because he knew everything he said, but so you would know the truth because the truth will make you free. Being a Soldier in the Army of the Lord, the word he studied, for his years were spent studying it over and over again. These words I (Nyiatumba C. Okoro) leave for you: Accept Jesus Christ, as your Lord and Savior, read the word of God daily, study as often as you can, that you may know His word. Be as faithful to God's work as you were for the Devil. I have fought the good fight of faith, I myself have stayed on course, now God will do what His Word states. Do not let this time pass you by. God used our friendship to get you here. Listen to the preacher's words. This may be your last opportunity. You could be here next. Nyiatumba Okoro leaves to cherish his life, his number one Love after God, his Snookums, of 43 years, Nyiaobe C. Okoro, who without her he would have never made it this long. He has six children, John L. Shields IV (Yonga), Tony Stewart (Alba) Tracy Shields (Derrick), Michelle Eaves-Shields, and adopted sons: Trevin Butler (Melanie), David Cousins Jr. (Lakeva), Dwayne Brown (Bonita), Corey Johnson. Five brothers: Charles Shields, Darryl Shields (Dollie), Michael Shields, Kevin Shields (Jennifer), and Jimmie Shields (Porsha). Four sisters: Joann Shields-Jones (Skip), Evette Shields-Wilson (Mark) Yvonne Shields-Fitchett, and Brenda Shields. Four best, lifetime friends Elzie (Ju Ju ) Shabazz, William (Jeter) Epps, Archie (Roscoe) Edwards, and Curley ("Billy Boy") Hill. Twenty-four grandchildren and ten great-grandchildren. And a host of nieces, nephews, cousins, and friends.

The Lord Giveth And The Lord Has Taken Away Today is the time that the Bible speaks about in the book of Ecclesiastes, a time to be born and a time to die. Nyiatumba C. Okoro was born on January 9, 1950, to the late John L. Shields Jr. and... View Obituary & Service Information

The Lord Giveth And The Lord Has Taken Away

Today is the time...