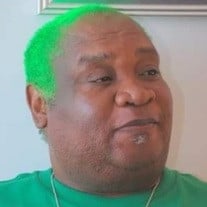 Mr. Robert T. Grundy, known to many as "Grundy" departed this life Monday, June 29, 2020 at Southside Regional Medical Center, Petersburg, VA. Robert was born October 12, 1950 to the late Robert Grundy, Jr., and the late Alice Louise Davis Grundy in Arkansas. Most of Robert's education was overseas. He attended grade school in Japan and Korea, high school in Germany, and his last year in Virginia where he graduated from then Peabody High School, Petersburg, VA.  Following in his father's footsteps, Robert enlisted in the United States Army and became the Army's youngest first African American Sergeant. After Robert's many travels, he made his way back to Petersburg, VA where he grew roots in the Blandford Community and worked for Virginia State University, BRENCO and St. Ann Catholic Church where he retired with over 25 years of dedicated service. Robert was well known in the Blandford Community and also the Catholic Community for his love for people and his love for Christ. After becoming a member of St. Ann Catholic Church in Colonial Heights, VA, Robert strived to develop a close relationship with Christ and grew his Faith.  Along with his parents, Robert was preceded in death by his son, Antoine Lamont Keene; brother, George A. Grundy, Sr. and niece, Josephine Roach.  Robert leaves to cherish his memories and legacy, his only daughter, Crissea Keene Nickell (Mark) of Sumner, WA; granddaughter, Lauren Louise Walker of Olympia, WA; his baby brother, Gregory Grundy of Virginia; and 3 non-biological children whom he loved and adored as well, Robert Keene, Jr. of Petersburg, VA, Patricia Keene Booker (Theodore) of Dinwiddie, VA and Talite Keene Hooper (Keith) of Colonial Heights, VA, who selflessly up until COVID-19, prepared Robert's favorite meals and visited him often at his assisted living facility; and his nephew, George A. Grundy, Jr. (Erica) of Chesapeake, VA. Robert was loved and showed much LOVE to many. He had many devoted friends that were very close to him to include: Ruby Lee Keene, Ernest Cobb, Sandy Fobia, Mary Graves, Sara Jones, Hilda Lifsey, Hank Duarte, Bob Young, Rob Kellis and Jack Lambert. Robert will sincerely be missed by the Knights of Columbus, the Blandford Community and his parish family at St. Ann Catholic Church.  A special thank you to St. Ann Catholic Church and the Knights of Columbus for your kindness and your assistance to the family. A Celebration of Life will be held 1:00 PM, Sunday, July 5, 2020 at Fisher-Hayes Funeral Home and Cremation Services, 415 Halifax St., Petersburg, VA. Rev. Dr. Antonio A. Tucker, Sr., officiating. The service will be live streamed.  Please join us in uplifting the Grundy family with your prayers.

The family of Mr. Robert Tyrone Grundy created this Life Tributes page to make it easy to share your memories.

Mr. Robert T. Grundy, known to many as &quot;Grundy&quot; departed this...

Send flowers to the Grundy family.