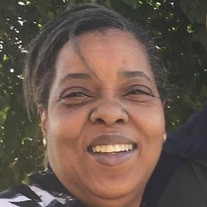 Mrs. Shelia Allen, 59, on 535 South Dunlop Street, Petersburg, VA, went home peacefully to be with the Lord on Friday, October 2, 2020 at 9:48 P.M. at her residence. She was born March 23, 1961 to Thomas Quick and the late Fannie E. Crump, who preceded her in death. Sheila was educated in the Petersburg Public School System and graduated with the Class of 1979. She was employed at Arby's for many years where she met many friends. Shelia loved watching Power, Family Feud, The Chase and many other game shows. She also loved watching anything that had to do with investigation. She was always tuned in to the news channel and stayed on top of everything that was going on. She would always listen to her scanner. She was called "12 on Your Side" by her sons, Ricardo and Justin. No matter what was going on, at any time of the day or night, Justin would call to check on her and in the midst of doing that, he would ask her to turn on her scanner because he had seen the police somewhere on Crater Road or Sycamore Street on his way home from work. Sheila, "12 On Your Side," would respond saying, "Okay… Hold on… I'm going to call you back." In about five to ten minutes, Justin's phone would ring and it was her letting him know what was going on. Sheila loved to sit outside underneath the carport and on the porch, just like her beloved husband, just to be nosey to see what was going on outside. She loved cooking big meals for her family and friends for all events and holidays. She enjoyed playing Candy Crush and many other games on her phone or her iPad, and she loved talking on her phone. She could always be found reading a good book and she was very fond of love stories. Even though she didn't go much, she loved talking about going to the beach. She was an avid San Francisco 49ers fan and also the Dallas Cowboys because of her beloved husband, Ricky T. Wyatt. Shelia leaves to cherish her memories her father, Thomas Quick; her children whom she loved dearly to include: five sons, Kenard Williams, Ricardo Williams, Justin Williams, Xtreme Jones all of Petersburg, VA and Kevin Williams who went home to be with her and the Lord two days later; one daughter, Tiffany Payne of Portsmouth, VA; Jameica Grimes of Fredericksburg, VA and Amanda Trull of Chester, VA, who were like daughters; four sisters, Devern Wedd of Richmond, VA, Sandilen Stewart, Samantha Crump and Qiana Merrit all of Petersburg, VA; two brothers, Nathan Quick and Quincy Quick; nephews, Theodore Black, Trevon Black, Jason Black, Shawn Black, Jerrelle Crump, Dwight Stewart, Antoine Stewart, Sean (Katherine) Stewart and Nigel Stewart; nieces, Desiree Stewart, Tamika Black, Charissa Cuozzo-Edwards, Kyra Stewart and Tyeisha Cuozzo; grandchildren, Keyon Williams, Konrad Bradley Williams, Kannin Williams, Jaiydiyn Williams, Miyah Johnson, Mariya Smith, Timothy Williams and Elijah Williams and many more more; along with a host of other relatives and friends. A Celebration of Life for Shelia along with her son, Kevin, will be held 2:00 P.M., Saturday, October 10, 2020 at Tucker & Fisher Funeral Home, 415 Halifax St., Petersburg, VA with Rev. Dr. Nathan Quick eulogizing. A face mask/covering will be required while attending all services and viewings.

The family of Mrs. Shelia Allen created this Life Tributes page to make it easy to share your memories.

Send flowers to the Allen family.