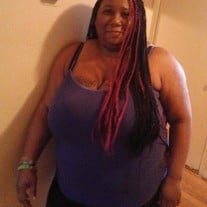 Stacy Chevon Puryear was born on August 2, 1978, and was called home on June 12, 2020. Stacy was a gentle kind-hearted person who loved music, joking, and laughing. She leaves behind two sons; Marquise and Montrell Puryear and two daughters;... View Obituary & Service Information

The family of Ms. Stacy Chevon Puryear created this Life Tributes page to make it easy to share your memories.

Send flowers to the Puryear family.