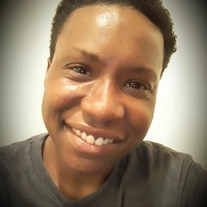 On Friday, July 30th, 2021, Syretta Brown entered into eternal rest. She was born in Stuttgart-Bad Canstatt, Germany on January 6th, 1982, to Loretta Brown and Llewellyn Perry. She is preceded in death by maternal grandfather Bennie Brown, maternal grandmother Mary Etta Joyner, maternal aunt Gloria Ford, maternal uncle Bennie Brown Jr, her father Llewellyn (Mack) Perry, paternal grandfather Leslie (Jim/PeeWee) Perry, paternal aunt Lettie Jean Perry-Coulman, paternal uncle Kenneth Perry, Cousin Reginald L Perry Jr, and niece Octavia Roberts. She was educated in the Hampton City School system where she graduated from Hampton High School as well as completed 2 years of Job Corps. She enlisted in the United States Army, after completing her education. She worked at Newport News Shipyard as an electrician where she achieved so many accomplishments as the first black woman electrician to work on a submarine. She decided to separate from the shipyard and pursue a certification as a massage therapist. To know her many will say she always made you laugh, she was the fun, yet cool laid-back one. She was always kind and loving to everyone she met. Her bright smile and hearty laugh brighten many of her family and friend's days. She leaves behind to cherish her memories, her two sons Damontae Lee Brown and Davontae Levi Brown. Her mother Loretta Brown-Johnson, Aunts Eula Grimes (Levin), Shelia Bryant, Sarah Brown, Doris Jowers (Wayne), Rose Slade (Victor). Paternal grandmother Ruby Perry, Aunts Delma Sheard, Felecia Perry, and Uncle Reginald L Perry Sr (Magdalene) and sister Nakita Roberts, 4 nieces, and 1 nephew. A host of cousins, extended family, friends, and colleagues. As she entered the gates, she heard him say, well done my good and faithful servant. What a grand reunion she will have as she is reunited with all her loved one who has gone before her.

The family of Ms. Syretta Brown created this Life Tributes page to make it easy to share your memories.

Send flowers to the Brown family.