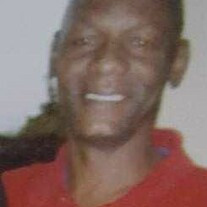 On January 30, 1963, God blessed the world with Thomas Leon Underwood, also known to family and friends as Sherman. Sherman was born to the late John J. Jones and Sarah H. Lynch Underwood closed his eyes on July 6, 2021, at the age of 58. Sherman... View Obituary & Service Information

The family of Mr. Thomas Leon Underwood created this Life Tributes page to make it easy to share your memories.

Send flowers to the Underwood family.