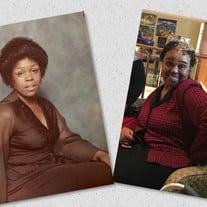 Vernice Gatling entered into eternal rest on July 3, 2020, at 11:52 pm. She was born December 22, 1952, in Bertie County, NC, to the late Roy and Magalene Peele. She attended Newport News, VA, and Patterson, NJ School Systems. Along her career path, her most proud moments in her work history were her CAN, Caregiver, educating children in the Arts, Music, and Technology, and lastly, she was a bus driver for NNPS which was her last occupation before her health declined. Yes, she was a "Jack of All Trades". Born Vernice but also known as "Vee", "Vee Gee", and "The Enchanting VG" for those who knew her well, will say singing was her first love or her love language as I called it. She was trained in many genres which led to her having her own band while living in New Jersey. Later on, this brought her back to her roots in gospel and she recorded music with family and friends. Vernice is preceded in death by her grandparents, Archie Gatling, and Pauline Bush; her brothers, Roy, Jr., Ray Anthony Peele, Randolf Peele, and Ricky Peele; her sister, Vanessa Peele; a special aunt, Marjorie Gatling; and a host of nieces, nephews, uncles, and aunts. She leaves to cherish her memories her loving devoted daughter and her caregiver, Tomeka Gatling; her living aunt, Gloria P. Carroll; niece/daughter, Larquita Smith; son, David Riddick; god-daughters, Maria Gallimore, Nicole Hosley, and Angelic Givens; two special nieces, Ebony (her songstress) Peele and Ivory (Diva) Peele; cousin Shon Clark; four god-grandchildren, Manyah and Miani Whiteside, Rayshawn Gallimore and Cal'Jawaun Allen; two sisters, Victoria Muhammad (Sulaiman) of Newport News, Va.; Vivian Smallwood of Hampton, Va.; two brothers, Randolph (Ray) Peele and Rodney Peele of Hampton, Va.; her two best friends, Robbie Ford of Memphis, TN and Patricia of Newport News, Va.; and a host of nieces, nephews, cousins, and friends.

Vernice Gatling entered into eternal rest on July 3, 2020, at 11:52 pm. She was born December 22, 1952, in Bertie County, NC, to the late Roy and Magalene Peele. She attended Newport News, VA, and Patterson, NJ School Systems. Along her... View Obituary & Service Information

The family of Ms. Vernice Gatling created this Life Tributes page to make it easy to share your memories.

Send flowers to the Gatling family.