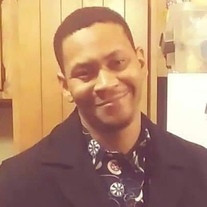 Von'dre Lamont (Blizzard) Hobley exchanged time for eternity on Saturday, September 4th, 2021. Von'dre was born on December 12th, 1986 in Hampton, VA to Roosevelt Blizzard and Hattie Holloway. Von'dre is preceded in death by his paternal grandparents, Roosevelt Blizzard Sr. & Gertrude Blizzard. His older brother, Roosevelt Blizzard lll, and sister, Latonya Moore. His maternal grandparents, Robert H. Mason & Birdie V. Mason; as well as his brother David E. Hobley. Von'dre was a happy and sweet young man who loved his family, his children, and most importantly he loved the Lord. No matter the situation Von'dre kept a smile on his face, a prayer on his lips, and love in his heart. He enjoyed eating, especially sweets and junk food. He was super competitive and would race his nephews. He enjoyed playing video games and was a movie guru. He was always lighthearted and would often share jokes. He will be missed for his infectious smile and the laughter he shared. Von'dre leaves to cherish the memory of his three children; Javonni James, Harmony Hobley, and son Jah'bhyrant Briggs. His parents, Roosevelt Blizzard, Jr (Raye) and Hattie Holloway (James). His maternal grandmother, Barbara A. McKinney. A brother, Antonio Atkinson; and two sisters, Linette P. Mason and Davetta E. Hobley. A host of other family and friends. Services will be Friday, September 17th at 11 am at St. Johns COGIC located 2416 Orcutt Ave. Newport News, VA by Bishop Michael B. Golden Jr.

The family of Mr. Von'Dre Lamont Hobley created this Life Tributes page to make it easy to share your memories.

Send flowers to the Hobley family.