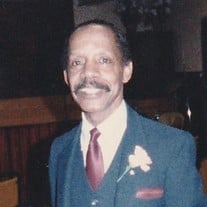 Willie Ray Ponton, "Nick", received and accepted his initiation to make his heavenly transition on July 28th, 2020, from Riverside Select Intensive Rehab Center, Newport News, Virginia. Willie was a native of Newport News, Virginia, born May 4th, 1933. He was educated at Huntington High School, and West Virginia State College. He enlisted in the United States Army in the year 1954, and after two distinguished years of service, was honorably discharged in the year 1956. Willie migrated to New York City in the year 1957, where he met and married his wife, Mary Isabel Lewis, in the year 1958. During the years of marriage they had two sons. Willie had several jobs over his life span but made a career as a Custodial Engineer for over 30 years in New York City. He was preceded in the death by his mother, Louise M. Ponton Day; stepfather, George Day; brother Harold Webster Ponton (Buster); and his sister, Evelyn Pittman. Willie is survived by the mother of his two children, Mary Isabel Ponton; his two sons Stephen Ray Ponton and Jeffrey Allen Ponton; six grand children Gabriel Ponton, Kendra Ponton, Jeffrey Allen Ponton Jr., Elijah Ponton, Joshua Ponton, and Delilah Ponton; and two great grandchildren Amani Jean Marie Ponton and Kenadee Eujeania Galloway. Luke 17:20-21 And when he was demanded of the Pharisees, when the kingdom of God should come, he answered them and said, The kingdom of God cometh not with observation, neither shall they say, Lo here! or, lo there! for, behold, the kingdom of God is within you. King James Version (KJV)

The family of Mr. Willie Ray Ponton created this Life Tributes page to make it easy to share your memories.

Send flowers to the Ponton family.